The Truth is on the Screen

Simon tells Katie sleeping together was a mistake. Adam accuses Casey and Will of babying Gwen. Mike begin reading what Katie wrote in her laptop.

At Java, Mike wishes Carly luck with Simon. He tells her maybe her being with him will stop him from chasing Katie. Carly lets Mike know about Jack overhearing her message to Simon, and then she reveals what he told her about wanting her back. She goes on to tell him how she told Jack she wanted to be with Simon, and Mike warns her about Simon being dangerous. "Simon is a liar and con man. Think about Simon, you never know where you stand with him," he tells her.

At Simon's place, Simon tells Katie sleeping together was a mistake, and he promises her it won't happen again. He goes on to say it's too late for them, but Katie can't believe what she's hearing. He believes they should let their memories go and start making new ones, and he tells her he realizes now that he wants to move on with Carly. Katie gets jealous, but tells him she's thrilled their moving on together, and she sends her best wishes. After sending her best wishes, Katie asks him not to tell anyone they slept together. "Don't worry, it will be our little secret," he assures her.

Carly comes in and is surprised to see Katie, but Katie leaves in a hurry. Carly wants to know what Katie was doing there and why she ran out in such a hurry. Simon tells her she was there because of her. "Poor Katie," Carly responds. Simon appears a bit confused and asks, "What do you mean?" "Did you see the way she ran out of here? It's obvious she still have feelings for you," Carly clarifies.

Later, they change the subject and begin talking about their business deal and how rich they're going to be. In all the excitement, they end up making love!

At the studio, Adam attempts to wake Gwen, but has no success. Will and Casey come back, and Adam asks what's wrong with Gwen. Casey explains she's tired from school, and suggests they re-schedule their session. Not happy with the response, Adam explains why they can't re-schedule, and while he's explaining the circumstances, Gwen wakes up. Adam turns his attention to her, and he informs her to sleep on her own time, because if she does this again he's gone. Casey gets angry and tells Adam he needs a nap. The whole time they are bickering, Jade is standing outside of the studio listening.

Adam furiously informs Will and Casey that they are babying Gwen, and he storms out of the studio leaving them to "baby" her. Once outside, Jade approaches Adam and asks if he's busy. He tells her no and offers to take her to lunch. Before the two of them can leave, Will and Casey walk up, and they are not happy to find Jade there.

Later, Gwen joins them and apologizes to Adam. She tells him she made a commitment and she's ready to finish her recording session. As they go back to work, Adam asks Jade if she wants to hang around until their through. Gwen looks to Jade giving her a nasty look, but Jade doesn't take the hint, and with a devious smirk, she says she'll stay.

After Gwen sings again, Will and Casey ask for Adam's feedback, and he admits its better. Gwen requests to speak to Adam alone, and then she asks him for his honest opinion. "Actually, you were pretty D** good," he compliments. She thanks him.

As Adam and Jade are leaving, Jade notices Gwen, Casey and Will in a group hug, and she sighs on her way out the door.

Paul confronts Craig about getting closer to Meg. "Why is it every time I'm not around you're alone with her?" Paul inquires. Avoiding the question, Craig tells Paul he saw them arguing and wants to know if his name was mentioned. Paul smiles and informs him it never came up, and then he confronts Craig about tricking her at the Halloween Gala. Craig seems surprised when he discovers that Meg told Paul about their meeting, and then he tells Paul he kissed Meg that day. "You kissed Meg?" "I just lost my head. You know, it was all the excitement and mystery of the evening. It just got the best of me," Craig grins. Paul lies to him, telling him Meg told him everything that went on that night.

Later, after Craig leaves, Paul phones Meg, but when she doesn't answer, he leaves her a message telling her to call him. After he leaves the message, he flashes back to what Craig just told him.

At Java, Emily tells Meg they need to make peace -- not be friends -- just make peace. She asks Meg to hear her out over coffee, and she tells her she's back in therapy fulltime. Meg tells her she's glad she's getting help, and agrees to have one cup. "One cup is all it will take," Emily responds.

While having coffee, Emily tells Meg it's easy for her because she gets everything she wants, and she continues to blame Meg for her baby's death. Meg sees that Emily just wants to start a fight instead of make peace, so she gets up to leave, but Emily apologizes for her outburst and asks her to stay.

After Meg sits back down, Emily grows panicky and fiddles with the vial she's holding under the table. Wanting to get this over with, Emily fakes a coughing attack, and Meg offers to get her some water. As Meg is getting the water, Emily quickly pours the drug into Meg's coffee. Meg returns to the table, and Emily thanks her saying something went down the wrong pipe.

Moments later, Meg begins to feel the effects of the drug. Emily asks if she's okay, and she says she must have caught something at the hospital and should go. Emily, trying to keep suspicion off herself, accuses Meg of using that as an excuse to leave, and then Emily gets up and leaves acting as if she's annoyed.

After Emily leaves, Meg really begins to feel the effects of the drugs. She drops her phone, and Craig arrives just in time to pick it up. As he hands her the phone, he stares at her. While staring at her, he looks like the devil himself! All he needed was the horns!

At the Kasnoffs, Lucinda stops by and suggests Mike take a peek at what Katie wrote. She tells him there would be no harm and it may add spice to their marriage. He tells her he wouldn't feel right, and goes on to say that would be spying on his wife. Besides, they have plenty of spice in their marriage he says.

Lucinda leaves and Mike picks up the phone to call Katie, but she's with Margo and doesn't answer.

Katie meets with Margo at Java and tells her about her meeting with Simon. Then she shocks Margo when she tells her she slept with him. Margo informs her she's not the only one in the family who's made a mistake. Katie tells her she's not going to tell Mike, but she says she'll make sure she doesn't ever hurt Mike again.

While chatting, Katie remembers she wrote everything in her laptop and must go before Mike reads it. Margo tells her she's knows Mike well enough that he's not that type. Katie agrees, but tells Margo she can't take that chance.

Later, Lucinda calls Mike and informs him that she just got off the phone with the editor. She goes on to say if they don't get the pages of "Oakdale Confidential" today then they may have to kiss the Thanksgiving and any future deadlines goodbye! He informs Lucinda Katie is not home, and she suggests he view the pages and send them to her. "Mike, Darling, your views on the invasion of privacy are known to me. However, what is worse (Lucinda laughs), looking and taking a peek at her computer, or having to deal with the devastation when you tell her that her writing career is at an end, all because you were to uptight (she stresses that word) to pull a few pages off the computer." He admits she's right and says he'll call her right back.

Mike hangs up to get the pages for Lucinda. As he sits down, he opens the file and begins to read. At that very moment, Katie rushes in and finds Mike sitting at the laptop. He gazes at her in disgust.

Monday on As the World Turns...

Katie, with her head down and unable to look at Mike asks, "Did you..." "Read about you sleeping with Simon? Yes, I did," Mike interrupts.

Carly sobs as she informs Jack that she picked the wrong guy.

Paul shows up at Java to find Craig and Margo together again!

While driving down the road, Dusty discovers he has no breaks! 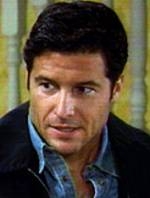