Meg arrives at the Snyder farm and Jack lets her know he talked to Bob. Meg explains that she was preoccupied when she filled out the patient's chart. Jack says what she did was an accident, but falsifying the diary is a crime and she must tell him who did it. When she doesn't cooperate, Jack states that all the evidence they have points to her, but she continues to stick to her story. He believes she's covering for Paul and asks if he did it, but she doesn't answer. "It was Craig. Craig Montgomery, right?" he questions. She refuses to answer any more questions! He suggests she give Paul a heads up, because he promises every piece of evidence he finds will lead to Paul! She reminds him that she caused Sarah's death and no one else is involved. He works to get her to confess that Craig falsified the diary, but she refuses to talk and leaves the room.

Soon after Meg leaves, Paul arrives looking for her. Jack begins to question him about Meg's patient, until Meg comes in and orders Jack to leave him alone. She continues to say she's responsible for Sarah's death and she's not going to let him (Jack) use her to hurt somebody else. Jack asks what's she's going to tell Emma. She asks him to promise he won't tell her, because she wants to tell Emma herself, but Jack advises her to call before she finds out from someone at the hospital first. "Look, when it comes to me she doesn't need another disappointment," she replies. Before Jack goes, he asks her to let him know where she will wind up. She assures him she's not going to leave town. "No, it's just -- we're family first," he reminds her.

Outside the farm, Parker reports to Jack that he finished his chores and asks if he can go to school now. Ignoring his question, Jack lets him know that he's just trying to do what's right for all of them, but he can't do it if he doesn't help him out.

Later, Meg asks Paul why he's there. He lets her know that he heard what happened and wants to help. "I don't need your help, Paul. I don't want your help. So, just leave me alone!" she pleads. When she starts to cry, he reaches out to take her hand and has a vision! When he comes back to reality, she knows he had a vision and asks him about it. He reveals what he saw, but she ignores the warning. He reminds her that all his visions have come true so far. She verbalizes that she needs to get out of there. When he expresses that he knows she's going back to Craig, she gets angry and accuses him of using his visions to "up the ante." He comments that he's just trying to save her life. "It's not your job!" she retorts. "Promise me that you'll be careful, please. Will you promise me that?" he asks sweetly. Instead of promising, she tells him goodbye.

Before Meg leaves, she recalls Paul's recollection of his vision: "Your bracelet slides off your wrist. This time I saw it fall onto a rock. I don't know where." She takes the bracelet off and throws it in the trash!

On Paul's way out, Parker asks Paul for a ride to school, but he says he can't because he has an appointment.

At WOAK, Katie begins filming when she trips over Brad sleeping on the floor! Kim tells Katie to keep rolling, claiming that they can edit this part out later. Katie reluctantly agrees and introduces Brad on camera. She's persistent to push him out, but he states his mom told him never to leave a lady's place messy. As he begins cleaning up -- with the cameras still rolling -- Katie tries to ignore his presence and keeps filming, but Brad continues to interrupt and asks her to demonstrate the "Butt Buster Buddy." Reluctantly, she begins demonstrating and he joins her. Kim watches, intrigued with their antics.

Brad uses the exercise device to pull Katie toward him, but she pushes him away. Soon after, with a smile on her face, she attempts to promote her book by asking if he's read it. He denies reading it and adds that he wouldn't know a good book even if she whacked him on top the head with it. SMACK! She does just that! He jokes with her and asks if she wants to wrestle, but she becomes irate and tells Kim to get the "Bozo" out of there so they can work. He offers to show himself out, but Kim stops him and tells the camera to keep rolling. "Now, what was that you were saying about wrestling?" Kim asks.

After they finish taping, Brad tells Katie he underestimated her, because she's actually good. She thanks him, and then shows him the door.

A man calls Kim over to review the tape of Katie and Brad demonstrating the Butt Buster Buddy. "I think we got a hit!" Kim comments.

Margo explains to Casey that gambling is an addiction and he's going to quit. He admits he's tried to stop but can't. Tom reports that he'll be allowed limited use of the computer and there will be a block on any gambling sites. He lets them know they need to do better than that because there are thousands of other places he can gamble. They continue to tell him that he'll be attending meetings at the hospital. He says the hardest part will be going back to the dorm where gambling still exists. They solve that problem too by telling him he's not going back to the dorm, because he's moving back in with them. He points out that he thought they didn't want him living there with Maddie. Maddie thinks they're going to kick her out, but Margo clarifies that they won't be doing that. Tom adds that they love her like she's their own, and if she wants to continue staying there, they'd love to have her.

Once alone, Maddie tells Casey he'll kick his gambling habit because he's strong, but he's not sure he can. He explains that if she leaves the room, he'd be on the computer gambling again. He goes on to say he needs her. "Why?" she asks. "Because you get me," he replies. He goes on to say she made him confess about Adam before anyone else, and she knew he wouldn't backstab Will. "Maybe you shouldn't mention that to anyone," she replies. "Mention what?" he inquires. "That you told me about Adam before you told anyone else," she answers. Casey expresses his opinion of Adam. He can't believe he ran and left both him and Will hanging. He asks Maddie if she forgives him. She hugs him and says of course she does, but she blurts out that she doesn't know if he'll ever be able to forgive her. "Whoa, wait. What's that mean? What's that supposed to mean? He asks curiously. "I just I don't know if I'm what you need right now," she replies. "Are you crazy? Of course I need you right now. How did I get this lucky?" he responds, looking puzzled. "Everyone makes mistakes. Sometimes without thinking we do awful things," she adds, and then says she has to go.

Gwen dreams that she goes to place flowers where she and Maddie left Adam's body, and Adam comes back to life! She screams and wakes up! Will is there to comfort her. He holds her and tells her it was just a bad dream. He asks about the dream and she says it was about a bunch of stuff. He articulates that she kept yelling, "No!" She finally discloses that she was afraid he was going to leave her. He suggests they spend the day together to plan their future, and adds that he has an idea. When she asks about his idea, he reveals that they can finish the demo, but she says she can't do that right now. Will works to change her mind but she gets angry and shouts, "I don't want to touch anything that Adam's touched! Don't you get it?" Will is confused and replies, "So, when you and Adam were doing this stuff together it was alright, but now that it's just me and you, you don't want it at all?" he snaps back. She says she didn't mean it that way and she'd love to work with him, but she just doesn't feel like working with music now. He tries to change her mind, but she pleads for him to understand. Finally, he backs off and suggests they focus on other things. In fact, he doesn't care what they do as long as they're together. She agrees; however, when he asks if she wants to go back to Oakdale U, she's speechless. He points out that she's been acting weird and pushing him away, so he asks her about the dream again. She gives in, but instead of telling him the truth, she states that in the dream, she buried the trust they had for each other and she let him down. "It's okay," he assures. "No, it's not okay. You didn't love me any more in the dream. You didn't love me. You left me," she continues. He comforts her promising that will never happen. Since he promised he'd never leave her, he asks if she wants him to go to the library or stay. She tells him to go to the library, but before he gets out the door, she calls him back and they begin tearing each other's clothes off in a heat of passion!

Shortly after, Will and Gwen cuddle in bed after making love. He raises her hand to his mouth to kiss it. "Where's your wedding ring?" he asks. "I I don't know," she replies, and then shudders as she flashes back to burying Adam's body.

Will confronts Casey about the bonds. "Whose idea was it to make it look like I stole the bonds? Was it yours? Or was it Adam's?" Will questions.

Gwen goes back to Adam's body to search for her wedding ring. 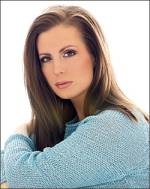