How Dare You Sacrifice Yourself For Me.

Chris gets a heart and loses it and Reid is run down.

Bob and John kick Kim out of Chris' hospital room as they try to keep him alive. Reid rushes in to help and Kim is left weeping with Luke. Henry and Barbara arrive. Luke tips Henry off that Katie isn't there. Once Chris has stabilized, the doctors tell him he's in very bad shape. Chris refuses the treatment that John suggests and won't be hooked up to a machine. He insists on being treated like just another patient and not being bumped ahead in line for a transplant.

Katie is in the cemetery talking to Brad's tombstone about how she's fallen in love with Chris. She needs to be strong enough to be with him but she doesn't think she can handle it. She begs Brad to help her be strong. Henry shows up and tells Bubbles that she's not a coward. He says that it takes lots of courage to remember and live with loss. His pep talk works and she asks him to drive her to the hospital.

In the hospital waiting room, Barbara sits with Kim. She tells her about being a newlywed and tries to think positively. Kim walks back into Chris' room and the doctors explain that he's refusing treatment. Katie and Henry arrive as Chris talks about how he doesn't want to be remembered struggling for his life. Kim tries to talk him around. "How dare you try to sacrifice yourself for me," Katie says. She tells him to listen to his doctors so they can have more time together. She accuses him of being a coward and tells him that no one who loves him wants to be spared this fight. Katie vows to sit at his bedside until he becomes healthy again and they can go dancing with Barb and Henry. He caves in and agrees to fight. Bob suddenly announces that a heart has become available in Bay City. Everyone is relieved.

At Al's, Ali is planning her wedding with Casey. She wants a cheap wedding in Vegas so they can avoid what happened last time. He doesn't want them to hide their relationship from anyone. She worries about the timing and wants something quiet and different. He'll go along with anything as longs as they get married. As they kiss, Luke wanders in and informs them about Chris. They're shocked.

In the hospital hall, Reid tells Luke that Chris' heart is ready. Luke thinks that's incredible. Bob asks Alison to scrub in to help with the surgery. Kim notices she's wearing Nancy's ring so she and Casey break the news of their engagement. Bob and Kim hug her. As they drift away, John walks by on the phone. His smile drops. He turns to the family and informs them that the heart has now been claimed for someone else. Chris says he'll go back on the list as planned. He requests to speak to Reid alone. The doctors spar and Reid tries to be encouraging. Chris asks him to take care of Katie.

Henry and Barbara are down the hall. She thinks he's the one who convinced Katie to come back. "You married a wonderful guy," he says. 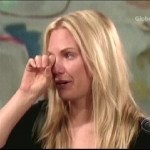 Katie runs down the hall crying. Barbara follows her and tries to tell her Chris has a chance. "Who cares? Everyone has a chance," Katie says. Barbara meant that he has a chance because she loves him. She tells her about her struggle with cancer and encourages her to be relentless.

Katie goes down to Chris' room. Reid watches them through the window and then looks around the waiting room at all the other couples who would be affected by Chris' death. He heads out the door. Luke follows him. Reid tells him that he is going to Bay City to get the heart and bring it back. Luke tells him that he can't do this but Reid refuses to back down. Luke thinks he's doing this because he cares about Chris but Reid tells him that he's earned the right to throw his weight around. "I love you," he tells Luke, kissing him.

In Chris' room, John informs the family that Chris' heart is too damaged for the treatment he was planning. The only chance Chris has is to get a new heart fast.

Luke finds Ali and Casey and tells them that Reid has gone after the heart. From the way he talks about Reid, they can see how much he's fallen for him.

Reid is driving along, yelling at the doctor in Bay City, when his car stalls on the train tracks. He tries to get the car going but it won't move. As the train comes at him, he struggles with his seat belt but it's too late.

Next on As The World Turns:

Tom and Margo tell Bob about the accident.

Chris wonders whose heart he has.

Please abide by the Guidelines when posting and Contact Us if a moderator is required to handle bad posts. Feel Free to check out ATWT's late breaking news, Comings and Goings, and ATWT Spoilers!! All photographs are courtesy of Soaps.com.

I Need You To Help Me.

As The World Turns Is Pre-Empted...