As The World Turns: Winners At The 37th Annual Daytime Emmy Awards

GH's Vanessa Marcil (Brenda Barrett) was on stage to call Michael Park's name. The Daytime vet won his first Outstanding Lead Actor Emmy for the role of Jack Snyder. He told the audience about what a heartbreaking final day of shooting the show had and thanked Producer Chris Goutman and Maura West (Carly Tenney) for their roles in his life.

Barely a minute later, Maura West (Carly Tenney) took home her second Emmy as Outstanding Lead Actress in a Daytime Drama and called her little girl up to help her accept the award. After giving her thanks, she and her daughter curtsied to the audience.

There was also a special tribute to the history of ATWT. Jon Hensley (Holden Snyder) and wife Kelley Menighan Hensley (Emily Ryan) were on the stage to help pay tribute to the show they have both called home for many years. A one minute long video montage was aired. There was also a tip of the hat from the team of directors from GH when they picked up their award.

Soaps.com sends our congratulations to all of the winners!

For a complete rundown of the winners and all of the special tributes of the night, please check out Soaps.com's 37th Annual Daytime Emmy Awards Live Blog.

Were you happy with ATWT's tribute?survey software 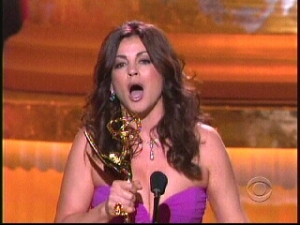 Credit: Maura and her daughter take her award (Soaps.com)

As The World Turns had a strong night and took home three statuettes at the 37th Annual Daytime Emmy Awards on June 27.

General Hospital‘s Jonathan Jackson (Lucky Spencer) and Kelly Monaco (Sam McCall) handed the first Emmy of the night to Julie Pinson. She took home the Outstanding Supporting Actress in a Daytime Drama award for her work as Janet Ciccone. Stunned, she ran up to the stage and thanked her husband, the crew and the cast.

As The World Turns Saturday Teaser Poll: A Man For Henry