As The World Turns Completes Shooting

Did you think ATWT would live on?Market Research 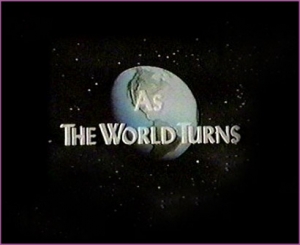 As The World Turns taped its final episode on Wednesday June 23, 2010.

Brian T. Cahill, senior VP and managing director of TeleNext Media Inc, released this statement: “While we are sad to see As The World Turns come to an end, we remain proud of the achievements the show has made over the last 54 years and are extremely grateful to the loyal fans who invited us into their homes every day. There is still much in store for the show’s well-loved characters throughout the summer, and although the show will go off the air in September, the remaining stories will honor the remarkable history of As The World Turns.”

Just two days ago, Colleen Zenk Pinter (Barbara Ryan) tweeted, “Just read the last script. So beautiful. How can we get through it?. A puddle of tears.” The final episodes of the show will bring together many of the show’s vets as they wrap up the final storylines and leave their final marks on Oakdale.

Since the show was cancelled in December of 2009, TeleNext Media has been searching for a way to keep it alive, but, much as with Guiding Light, the search has sadly proven to be fruitless.

The final episode of the historic series will air on September 17.

As The World Turns Video Promo: The Last Photo Shoot