The vortex of Katie.
Katie is continuing to become even more unlikeable. Although I've never been a big fan of Chris' character either, watching him get sucked into the Katie vortex is getting depressing. How many characters have fallen in there in the last six months? I understand that she wants to stay independent and grow up so more, and that's great, because she really needs to. But she only does it on one front and everything else in her life reeks of desperation and denial.

...but Craig and Lucinda were fun.
Lucinda and Craig were terrific all week. As usual, and against any hint of reality, by the end of the week he was out of jail. Before that, they had plenty of time to exchange threats. There was nothing new there but it hasn't gotten old yet. More intriguing for Craig is the fact that he's cozying up more to Lily. Although her seemingly endless back and forth with Holden has yet to bite the dust, Craig's invasion of her life could at least cause some interesting diversions, not to mention what it will do to Lucinda.

The kids aren't quite alright.
Parker's getting downright deranged in his obsession for Libby-lu. At least she's moving on, although she's starting to seem more like her mother all the time. Gabriel is also managing to seem eerily like Craig at moments. And Faith is doing an amusing job channeling several of the older characters. The only difference is that when she does it, she doesn't seem as immature as they do.

On drugs.
Paul, Emily, Barbara and Meg have all become caricatures of themselves. Aside from another jolting outburst of anger from Emma this week, the story felt more like a cartoon than ever. There was a time when I actually enjoyed the shenanigans of these characters. It requires a certain nuance, part serious, part tongue in cheek. But all of that has been absent lately. Even the snide quips Paul's been known to make to liven up a scene are absent. The problem is that all the characters are all so severely unbalanced that every action has an overreaction and there's no room left for tension.

PS.
Can Tom and Margo please have a plot before it's too late? 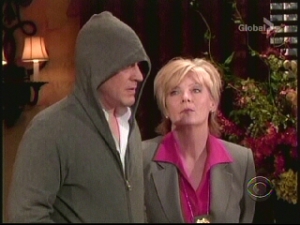 Thoughts on the week of June 14:

It was another off-kilter week in Oakdale. I’m starting to have that sinking suspicion that this summer may turn out to be as much of a rushed mess as last summer was. I hope I’m wrong. There were some good bits her and there, but a lot of the week seemed to be deliberately trying to end things while other things seemed to hover around for no good reason.

CarJack crash again.
Carly went pretty far over the top when she blamed Jack for his brother’s death and told him he wasn’t Parker’s real son. Ouch, that’s rough! It was in the heat of the moment, but it’s the kind of thing he would latch onto forever. I’ve never been a CarJack fan, or even a Jack fan, but even I found it painful. As usual, he immediately turned his attentions to Janet, utterly thrilled when he discovered that she’s having a boy. This led to him beating his chest a bit at Dusty. Anyway, I can only hope Carly will find something else to keep her occupied but Jack getting territorial with Dusty just makes me cringe. Do you think CarJack has a future?

Selling out the hospital.
But everyone’s relationship is a miserable mess right now. Luke rejected Reid’s offer to take things slow and hush hush. I guess sticking around while Noah was rejecting him for so long wore him down and he can’t stick it anymore. As usual, Luke will get wishy washy about this. I’ve been surprised that Reid has been quite as relaxed as he has been about how Bob has been treating him though. It was nice to see Kim show up to chime in about how he’s been keeping her in the dark. I’m hoping they’ll peel the layer off that a little more.

As The World Turns Video Promo: The Next Step