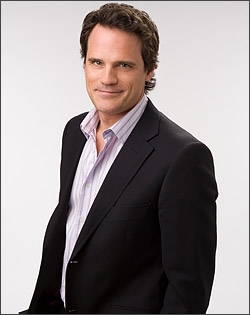 Hey, As The World Turns fans, this is your chance to meet your favorite stars in person!

*Michael Park will also perform at Blend Bar, along with several other bands on February 23rd; Terri Colombino, Katie, will also be in attendance. The event benefits the Autism Marble Jam Kids. It will be held at Blend Bar in Ridgewood, New Jersey. Tickets are $125, call (201)251-4343 for more information.

*Terri Colombino, Katie, will take part in the “When You Wish Upon a Star” event for The Maria Fareri Children’s Hospital at Westchester Medical Center in Valhalla, NY on March 8.

*The annual As The World Turns fan club luncheon will be held on Saturday April 26, 2008! The even will be from 12pm – 4pm at the Marriott Marquis in New York City. Tickets are $130 for non-fanclub members and $115 for fanclub members. Checks or money orders should be sent to:

*Jennifer Ferrin, ex-Jennifer Donovan, will star in the Broadway production of "The 39 Steps" beginning January 10th! The play will be held at the Roundabout Theatre Company's American Airlines Theatre and runs through March 16th. Click here for more information.

Past Appearances:
*Ewa Da Cruz, Vienna, will be a guest on Blog Talk Radio on January 17th! The interview is scheduled to air at 10 PM Easter time. You can find out more by logging on to Buzzworthy Radio here.

*Van Hansis, Luke, is starring in an off-Broadway production of the play "Die Mommy Die". Performances run through January 13th! Click onto their website to order tickets and get exact showtimes.

*As The World Turns and Guiding Light stars will participate in the first ever Daytime Fights Pancreatic Cancer event on Thursday, December 6 from 7:00-10:00 PM at Blondies, located at 212 W. 79th Street
in New York City. Cost is $25.00 at the door and all proceeds will go to the Lustgarten
Foundation for Pancreatic Cancer Research. Talent scheduled to attend include Martha Byrne, Lily, Jennifer Landon, Gwen, Grayson McCouch, Dusty.

*Austin Peck, Brad, is slated to participate in the first ever Soap Cruise hosted by Cameron Mathison (Ryan on AMC)! Fans have a chance to go on a "Luxurious 4 day cruise with 10 of the industry's top stars!" Learn the full details here!

*Ellen Dolan, Margo, will host the 7th Annual Workshop Theater Company Benefit: Red to Blank Party on October 29th. Several other ATWT stars are scheduled to appear including Alexandra Chando, Maddie, Eileen Fulton, Lisa, Trent Dawson, Henry and Michael Park, Jack. The benefit will be help at the Zipper Factory Theater and tickets are available at Theater Mania or by calling (866)811-4111.

*Congratulations to Marnie Schulenburg, Alison, who will begin appearing in the musical "The Yellow Road" later this month! Marnie's performances begin September 19th and run through October 1st at the Acorn Theater. Call (212)352-3101 for tickets or click here for more information.

Trent Dawson, Henry, will be part of the fun at the Rock Show for Charity put on by Bradley Cole, Jeffrey, Guiding Light, and the American Red Cross. The show is set for October 5th at the Red Cross Greater New York Headquarters, 520 w. 49th Street. Shows are at 7pm and 9:30pm and tickets are still available by clicking here. Proceeds from the event will be sent to the American Red Cross Greater New York Chapter.

Daytime stars from all of the networks will headline the Daytime Stars & Strikes charity event on Sunday October 7th! Jerry verDorn and Elizabeth Keifer, Blake, GL, will headline the event along with starts from AMC, ATWT, GL and OLTL will be on hand to raise money for the American Cancer Society Research Funding Department. You can learn more by visiting Daytime Stars and Strikes.

Several CBS Daytime stars will participate in a Meet & Greet at the University of Central Florida Memory Mall on August 30th. Agim Kaba, Aaron, is one of the guests slated to be on hand for the event.

On September 1st Marnie Schulenburg, Allie, will take part in the Hilary Duff Concert Meet & Greet. That event will be at the Darien Lake Performing Arts Center in New York.

And on September 8th Van Hansis, Luke, will hang out with fans at the Southwest Horseshoe plus Meet & Greet at the University of Massachusetts!

Maura West's hairstyle: Get those...