A new wig.
Liberty had her wig altered, although she still looks suspiciously like she's auditioning for a part in a Ronettes tribute show. She graduated from school and the showed tried to do its version of the "Gilmore Girls" again. At the grad party, Parker punched Gabriel (I guess he has the same problems with repetition as his father). Faith still managed to be the most mature younger character.

Papa Henry.
Henry had a mournful remembrance of the child he'd lost. He also shared a rather touching scene with Barbara about it, which was only one of the reasons her behavior during the rest of the week was so off. Casey and Ali continued teaming up to get to the bottom of what Vienna's up to. She's being painted more and more badly and it's really too bad because it doesn't help what isn't a very strong story to begin with.

Punch.
Noah did his best to be interesting this week. He moped and got angry, lashing out at Reid. After firing him as his doctor, he punched him in the face. Noah's never exactly been emotionally mature, but since he's in Oakdale that's hard to notice. Reid called him a spoiled brat, which he is, although he's said the same to Luke (which is also true); the difference is that Luke still radiates energy and Noah's more like a broken microwave. Making things worse, Bob gave the doctor an ultimatum. He told him he'd have to end his relationship with Luke or he couldn't have his hospital wing. Reid accused him of being homophobic, but, whatever it was, it was one of the most irrational things Bob's done in awhile. 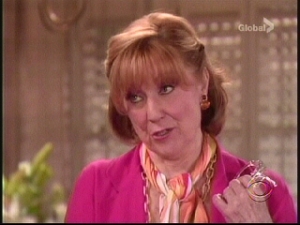 Thoughts on the week of June 7:

There was a little bit of everything this week in Oakdale.

The three women.
The cycle of Paul and his three women got more play this week. Considering the fact that they are all dangerous, compulsive liars and mentally ill it’s amazing that they function as coherently as they do. Since no one is actually particularly sympathetic in the equation, it’s kind of hard to care that much. Meg is drugging herself, but acting relatively ‘normal’ whereas Barbara completely fell into a caricature of herself. Emily is more or less right about Barbara. She does have an unhealthy and sometimes creepy relationship with her son.

Toxic couple.
Jack and Carly continued to fight. First, inspired by the wisdom of Craig, he told her that they were toxic together. He’s right. Even Carly has said this before. One of the interesting things about her alcoholism plot was that it put a mirror up to that. Substance abuse is less grueling than sick love though. I have to assume Jack got that indent on his head from knocking his cranium into a wall every time he has a conversation with her. Cranial trauma is the only thing that makes their scenes together make sense. Anyway, as soon as he walked away from her over the Parker fiasco, she caught him helping to destroy evidence for Molly and exploded at him. Although she does have a point about Jack’s completely dubious sense of ethics, it only proves further how toxic they actually are together. Is Carly right about him? Vote in our poll and let us know what you think about Jack’s Hypocrisy.

Marriage bells.
Molly and Holden decided to get married. She was happy, especially after he offered to destroy her stock of Silas porn. It’s hard to tell if Holden was being gallant or if he was just really uncomfortable with the idea that Molly has had a very different sex life than his and wanted to erase it. After all, women tend to leave him and lurch into kinky love affairs, which leads one to guess that the farmer is about as exciting as his vocal intonation. With Jack’s help, they destroyed all her sex tapes. Lily pouted but tried to let it go. Lucinda adamantly refused. She had more interesting things to do than meddle in Lily’s love life though. She and Craig continued to attack each other. He finally broke out of jail just so he could do it without bars getting in the way. There’s more believable passion between them at this point than anyone else in this plot.