Chris + Katie.
A drugged out Chris thought Ali was Katie and told her all about how he feels about her. Alison didn't exactly appreciate it. Since I wasn't keen on seeing them reunited, I'm okay with that, although she and Casey seemed to be immediately gravitating back to each other afterward. But Chris and Katie? I guess they have to have something to do...

Generational problems.
Faith was actually likable this week. She proved to be one of the only people in her family with a brain and seemed to see everything pretty clearly. She also got sucked into one of the show's rare fantasy scenes. It was a brief affair, full of disco era lighting. Lily got drunk, passed out and imagined marrying Holden again. It was funny, even if the premise is a yawn. But I like the fact that they are going so far to juxtapose Holden and Lily with Luke and the two men in his life. Noah confronted Luke about Reid. Both men ended up walking away from Mr. Snyder, who was left longing. It's a bit depressing to watch the younger generation make the same mistakes as their parents. You should never mistake emotional retardation with romantic idealism, but the people who write this show can't see to figure that out. Can't the young ones at least rebel in a remotely meaningful way?

Killing Silas.
Molly killed Silas after he tried to rape her. Holden showed up and explained how they could cover things for the police and then popped the question. I guess if watching your lover nearly get raped and then blow someone away doesn't let you know how you really feel about them, nothing will. Of course, at the same time, Lily realized she wanted him back and they even kissed. I can't say I care unfortunately, not unless they have a lot more corny fantasy sequences in store. There are other problems, like the way Silas has been portrayed. It's hard to understand how he and Molly actually had a relationship. If Molly is that screwed up inside, it certainly hasn't been persuasively written into her relationship with Holden. She just seems needy most of the time.

Etc.
Jack and Carly were nearly absent all week. It looks like she's been keeping him distracted with sex the whole time but that didn't stop him from jumping all over Gabriel about the fire the first time he saw him. Gabriel was mostly distracted by The Wig. Craig has a great scene though where he told Jack about what a horrible addiction Carly is. Actually, most of the speech sounded exactly like what Carly used to say about Jack. 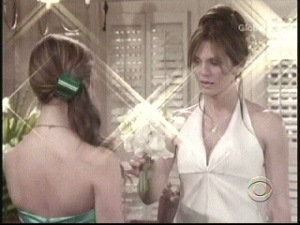 Thoughts on the week of May 31:

Things continued to be out of whack in Oakdale this week. Although they may have all been treading over familiar territory, most of the characters still seemed lost in a haze.

Casey isn’t as dumb as he looks.
But they have finally succeeded in making Vienna completely one dimensional. There were at least two dimensions to her before. It’s too bad really, since everyone else in the square (for some reason ATWT rarely seems satisfied with triangles, which basically means most of their love stories are actually orgies) is actually being written fairly well, it’s a bit of a drag on the proceedings. Casey readily figured out everything that was going on but was plagued by indecision, which is generally the greatest evidence that he’s being thoughtful about his situation. It would have been nice to see him and Vienna actually have something resembling an affair rather than a medical experiment.

Meg is being drugged.
Apparently. Not that Meg is in dire need of medication to make her act off-kilter. She freaked out a few times this week around Eliza’s christening and claims to have no clue what’s going on. Emma has been acting saner than she has for awhile so she could be up to something. Barbara already suspects that Emily could be drugging Eliza’s mama. Meg drank tea at Fairwinds, which Em might have drugged. But she also drank water at the hospital which she couldn’t have drugged. Of course, it could all be a red herring and Meg could just be being Meg. But I’m pretty sure Eliza isn’t drugging her. Vote in our poll and let us know who you think is drugging Meg. As usual, Paul is siding with Meg since they share dementia as much as history. If only we could see what Eliza would actually grow up to be like… I’m not sure anyone in town would be left standing.

Farewell Nancy.
Nancy had her last appearances this week. She was there to dole out advice to Casey and Alison and then Katie. It really is a shame they didn’t give her more to do… or better advice to hand out. In case you missed it, here it is.

As The World Turns Video Promo: Could Lily And Holden Get Back Together? 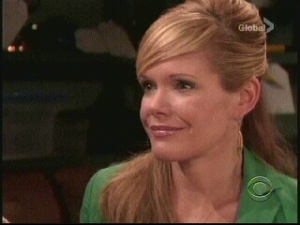