Are you happy with the show's recognition this year?online surveys

Vote in our poll and let Soaps.com know what you think. 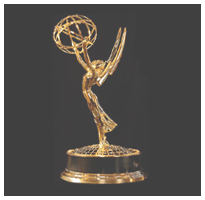 The nominees for the 37h Annual Daytime Emmy Awards were announced today.

In the Technical Categories:

Margarita Delegado and Philip Heckman were recognized for Outstanding Achievement In Costume Design for a Drama Series.

Theresa Marra Siliceo, Lillian Cvecich and Wilfredo Sanchez were nominated for Outstanding Achievement in Hairstyling for a Drama Series.

Robert Mackler and Matthew Griffin were singled out for Outstanding Achievement in Multiple Camera Editing for a Drama Series.

See this article for the Actors Nominated For Daytime Emmys.

Soaps.com sends our congratulations to all of the nominees and wishes them all the best of luck.

For the full list of nominations for all shows, please see The 37th Annual Daytime Emmy Nominations Announced and take a look back at As The World Turns Emmy Pre-Noms.

As The World Turns Video Promo: Trent Dawson Has Martinis With His Fan Club