At Least Lucinda...
The Lily, Holden and Molly triangle continued. Do I need to say anything? Molly has always been insecure with a penchant for self-destruction and that could prove to still be interesting. Lily is Lily. Honestly, it's Holden that bothers me the most. The other two I can forgive. At least Lucinda popped in to make things enjoyable. "You're not a weak woman - you just act like one now and then," she told her daughter. I wish there was more evidence that that was true.

...and Liberty got a wig that looks like it came from the prop room for the "Sonny and Cher Show."

In sad real world news, Helen Wagner, who played Nancy Hughes since the dawning of the series, passed away on the weekend at the age of 91. Although her character has been given very little to do in recent history, her presence was still felt somewhere in the background. No word yet on how, or if, this will be written into the completion of the series. One can hope, at least, that it will be included in a way which makes sense, paying tribute to her and providing some kind of closure for all of the lives her character has touched.

Anyway, that was my babbling for the week. Please feel free to leave your thoughts and opinions in the comments section below and remember that this is all in fun. For a sneak peek into next week, be sure to check out our spoilers.

Have a nice weekend everyone. 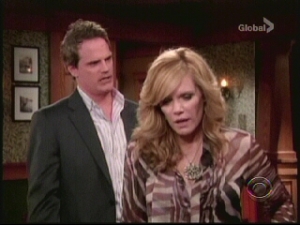 It was a strong week in Oakdale with the Carly, Jack, Janet plot pushed to the background.

Back to Henry and Barbara.
After being absent last week, Henry and Barbara returned with a vengeance. His bedroom farce with Vienna went full out with Barbara walking in on them in the middle of a bondage scene. Henry finally tore himself away from his Scandinavian sex bomb and became hyper jealous when he saw Barbara having dinner with a rather suave pilot. After putting the kibosh on that, they went disco dancing. It was all good fun. Barbara even had good chemistry with the pilot. Unlike some of Henry’s other plots, where the comedy and drama don’t quite mix right and things rapidly become wildly uneven, this story is consistently hitting the right balance. Originally, Barbara seemed a little too desperate in the mix but her role in it has become much more nuanced. Beyond their chemistry, the other thing this story is starting to show off is the side of Henry that actually has a bit of a spine and a lot less spite.

Sleaze.
Vienna tried the oldest trick in the book and decided to use the town stud to knock her up while Henry was out. Sleazy? Yes. Desperate? Yes. Understandable? Not really. But if you’re going to do sleaze, you should do it sleazy. Sleaze done half way is just cheating. Of course, this week wasn’t the only romp she’s going to be enjoying with Casey. There’s more to come so here’s hoping.

Botched Opportunity.
Luke and Reid’s leap into romantic bliss was short circuited again this week. He and the doctor shared another passion filled moment and nearly went to bed. Noah’s long awaited surgery came and didn’t go as expected. This led to Luke blowing up at Reid and accusing him of botching the operation. Reid was remarkably understanding of Luke and backed off. Although Reid got to do a perfunctory shirtless scene to compliment the one which Luke had a few weeks back, and although the sexual chemistry was cranked up further than it’s ever been for Luke, things still didn’t work out. I guess it’s the Snyder in him, but Luke’s protestations of love and devotion for Noah make him sound like a delusional twelve year old girl than anything else. Do we really have to watch him settle for an overcooked vegetable like Noah when he can be with snarky doctor brainy? From a strictly storytelling point of view, Reid and Luke should have had sex. It would have added infinitely more tension and awkwardness in the wake of Noah’s surgery.

The Conscience of Craig.
Craig’s life continued to get sucked down the drain and it gave Jon Lindstrom plenty to play with. He does drunk well, and believe me, that’s hard. He also perfectly plays malice and lies through his teeth with grit and determination. Within all of that, you could still glimpse genuine remorse and a desperate desire to do something giving (if not exactly good). Vote in our poll and let us know who you think was the best Craig.

Parker Poses.
Parker continued to get mired in the mess that he’s only marginally responsible for. Like most of the other mad mothers of Oakdale, Carly is willing to let her son get away with nearly killing someone. I guess she doesn’t want the cops to take over her disciplinary rights so she’s been schooling him in how to lie. He’s not very good at it, which is surprising since both of his adult role models have spent their lives lying to themselves and other people about almost everything.

As The World Turns Saturday Teaser Poll: Who Has The Baby? 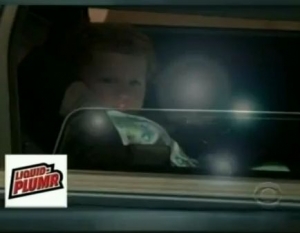