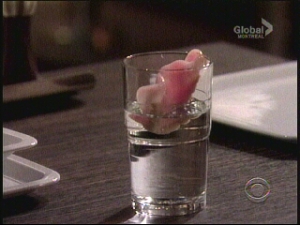 Who is after Craig? (Soaps.com)

Carjack-Dustjacket Redux.
Just in case the convolutions of this storyline were lost on anyone, they spelled it out as explicitly as possible without making it pornographic. Janet was trapped in Carly’s bed with Jack’s baby while Dusty snuggled with her. Which should just confirm that this square of love isn’t so much a grand romance as it is an over-the-top bedroom farce. While it’s funny to think about, it’s not quite as entertaining to watch. Although Dusty and Janet manage to be cute, Jack manages to get more annoying all the time. He was getting hyper possessive of Janet all week, which irked Carly, though not as much as it should have. She knows that he really loves her, but the problem is that love doesn’t actually amount to much for Jack. It’s just something he conflates with a series of bad habits to make his own immature behavior seem more meaningful. By the end of the week, he was promising Carly cheese while Dusty was buying Janet a house. Unfortunately, just as things were looking up for Janet, Dusty ended up with his head smashed in. Jack found his body and said what most of us were thinking: Not again…

Nice touches.
In what is continuing to be a nice surprise, the more overtly farcical love triangle of Henry, Vienna and Barbara is actually turning out to be a rather tender and sexy love story. Vienna tried to use all of her tricks but he’s clearly smitten with Barb. Although their story started by exploiting some of their worst traits, it is now starting to show them in a better light than they’ve seen in ages. Even Barbara’s dread of her age was played for charm when she had an out-and-out fantasy of going into Al’s on a walker and plucking out her false teeth while Henry and Vienna tangoed.

Losing Faith.
A less successful triangle was also going on. Lily and Holden are still spending plenty of time together thanks to Faith's mischief. Molly is getting insecure and didn't want to be played by anyone. All Holden could offer was a pep talk on how relationships are hard work. It was great when she told him that she didn't want to be his business partner, she just wanted a sexy relationship. Unfortunately, Holden seems like a bit of a workaholic. Faith managed to steal most of the energy from their quarter this week. She's quickly gone from being an awkward teen to a stereotypical summer soap moper. They've already thrown her drugs, body issues, stealing and hinted at romantic problems. Although she clearly has eyes for Parker, she now has intriguing bad boy Gabriel on her radar. What do you make of him? Vote in our poll to have your say.

Mixed Bag.
Less tantalizing that Faith's prospect for romance was the specter of an Alison and Chris reunion clearly rearing its head this week. I just don't want to think about that right now and having pro-active Katie in the mix isn't sweetening the deal. On the bright side, Luke and Reid have become more entangled. Not only has Luke seen a new side of the doctor, he's also become one of his major investors which promises a lot more air time between them. Since they've both managed to bring out a fair amount of range in each other so far, their chemistry should only get better.

Anyway, that was my babbling for the week. Please feel free to leave your thoughts and opinions in the comments section below and remember that this is all in fun. For a sneak peek into next week, be sure to check out our spoiler page.