Terri Garber Returns To As The World Turns 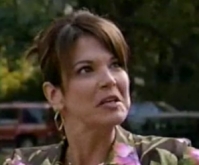 A peek at what summer promises.

Terri Garber is going to be returning to the cast of As The World Turns. The actress will be reprising the role of Iris Dumbrowski, the drunken con artist who wreaked havoc on her family the last time she was in Oakdale. This return will coincide with the return of Will (Jesse Sofer) and Gwen (Jennifer Landon). The couple who bore the brunt of many of her schemes. You can read more about the character in Iris’ Character Profile.

Garber left the cast in early 2008. Previous to her arrival in Oakdale, she appeared on "Dynasty" and "Santa Barbara." Fans can expect more than a brief appearance from her. She begins shooting at the end of April and will work all through May. Her character should return to the scene soon thereafter.

Soaps.com is happy to welcome her back.