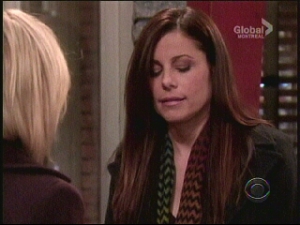 Reid gets another layer (Soaps.com)

Although it was a truncated week with only three episodes, each episode managed to be well focused and a strong string of episodes resulted. They weren’t the most thrilling in the world, but they were balanced and enjoyable.

Chris is settling back into town fast, which is a little worrying since that could mean that he will be settling back into old habits; in particular, an old habit like Ali. She seemed disturbingly conscious of this possibility and ran away from him as fast as she could. Ali didn’t waste time pointing out that she just repeated with Mick and Casey exactly what happened with Chris and Aaron, which leads one to wonder which part of her problematic past she’ll end up repeating this time. He seems to be gravitating more to Katie, however, which is a positive sign. His past and professional rivalry with Reid also bode interesting. The fact that we’ve been given no explanation as to why he so abruptly returned could end up amounting to something as well.

Meanwhile, Alison ended up moving in with the other character who, against all the odds, seems to be perpetually doomed to blandness – Noah. Since Noah is trapped in Oakdale without eyesight or even an ark to escape on, he had to find a new roommate. Moving back in with Luke was a big no-no so they had another of their many break-up scenes, if you can break-up when you aren’t really together. That seems to be the supercouple’s only real superpower. The Noah situation pointed to something far more annoying, which is the fact that Maddie’s departure was given virtually no explanation. It’s not surprising since the poor woman has been given almost nothing to do the whole time she was back.

At least it looks like Reid will be sticking around. Thanks to Katie convincing Henry to donate the Stenbeck fortune to put a new wing on Memorial, Oakdale's version of Dr. House shouldn't be leaving soon. His relationship with Luke also began taking an interesting turn. Luke caught the doctor in a volatile situation and, though their confrontation over it bristled with violence, it also bristled with more sexual energy than Luke has seen in a really long time. They play well off of each other and Reid's arrogant, defiant personality could be exactly what Luke needs to free him from the neediness which seems to continually sabotage his becoming an interesting character again.

Henry had good scenes with both Vienna and Barbara. He managed to resist Vienna's advances and finally realized that, like a lot of the women in Oakdale, she's in love with a myth about a man instead of the real thing. Having her reappear seemed to be what he needed to let him know exactly what he feels for Barbara. Their scenes seem to get better every week. You can really see their relationship grow in layers and nothing feels forced about it. Barbara also shared a lovely little scene with Kim where they talked about men and Kim pointed out that sometimes you have to dump a lot of words on them, over and over again, before anything gets through.

Other highlights of the week: Dusty and Janet's chemistry perked up some more and managed to be one of the few things to make their plot watchable. The new Liberty also arrived, though, given the fact that she's extremely ill, wasn't given that much to do. The movement to a new actor has been remarkably unjarring so far. Lucinda made a welcome appearance, as did Lisa, to spice up their stories even if they are still only marginally present. There were things to be less enthusiastic about, of course. Like Holden and Lily being Holden and Lily and Carjack being Carjack but it's St. Patrick's Day so I'm just going to have a pint and forget about them.