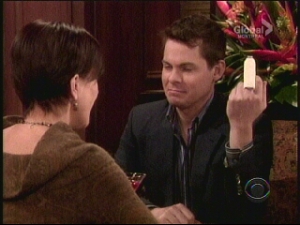 Thoughts on the week of March 1-5.

Once again, and it felt like more than ever, the week concentrated on the CarJack-DustJacket pentagon of passion. No one really came off looking good this week in it. Janet looked like more of a befuddled hypocrite. Carly looked like more of a selfish, manipulative cow. Jack continued to seem like a weak, lost soul. Dusty looked a little desperate. I even started losing faith in poor Craig and why on earth he seems so determined to stay entwined in Carly’s life. I understand that he loves her, but this is starting to go pretty much against his own interests, business and otherwise, and that’s just not like Craig. If Craig wasn’t so smug, his underhanded attempts to keep blondie in his life might almost seem self-destructively romantic.

Poor Dusty. I’m never entirely sure what to make of him. Does he just speak his heart, or is there more to him simmering beneath the surface? Since he’s actually once of the most well-balanced people in Oakdale, I have to wonder. His past with Jennifer came up a few times this week, but I still feel like we aren’t getting enough out of Dusty and why he feels the way he does about things. Like Jack, he always feels compelled to act heroic, even if he’s also a less than heroic character. But with Dusty, there’s something mysterious, whereas with Jack, it’s clear that he’s just a mess. Jack and Janet more or less broke up, even if they decided to still have a baby. That didn’t last. He backed out because Liberty ordered him to and then he ran back to Carly wagging the tail between his legs (in more ways than one). His most thoughtful moment of the week was his momentary frustration at attempting to pull off his wedding ring. I kept thinking: Will Jack misinterpret the ring not coming off of his finger as some kind of grand sign? This issue was never actually resolved, just introduced and then dropped, which is appropriate given the anti-climactic nature of a story which holds so few surprises. The introduction of the idea of IVF only backs this up. After all, it’s the ultimate way to push something ahead without any kind of climax. There was an abrupt change on Friday when Dusty asked Janet to marry him. She fainted. It was cute. At the hospital, it was confirmed that she was pregnant, effectively rendering most of the episode kind of pointless.

The return of Damian. So he's really not dead and it looks like he's been hanging out stateside for most of the time since his disappearance. He popped up to rescue Faith from problems at boarding school. It turns out that Holden's little girl is a drug fiend. This wasn't really extrapolated much and neither was how Damian learned of this so easily and managed to swoop in. Since the school started giving 'aunt' Molly all sorts of inside information when she called up, they don't seem real keen on security or respecting people's privacy. Anyway, it did give us a chance to see NuFaith, who I think has sunk remarkably well into the role already. She returned to town as Damian's go-between and has already almost had more to do than the character's had in the past year. I enjoyed watching Damian hiding behind landscaping and peeking out as he tried to get into Lily's house. I also enjoyed the paranoid little car conferences that Faith and Damian kept sharing. Aside from Lucinda's brief, but always welcome, swanning in, that was the most fun thing in this story this week. Most of the time I just wondered what Meg will do when she finds out about this.

Reid's hearing. The problems with Reid are reaching their end. His hearing cleared him of any wrong doing so he's free to go. Much to Luke's shock, Noah is going with him. Reid wasn't quite as abrasive as usual. Instead, Bob got most of the good lines. Meanwhile, Henry continued to be jealous of the young doctor, even if he is bonking Babs. Although I think Henry and Barbara are fun, the entire situation still makes me uncomfortable. She is his brother's mother and he's obviously pining for Katie, which is too bad since they never made much of a couple either. Henry did get another nice comic piece to work with, however, when he broke his middle finger and had to go around town looking like he was flipping everyone the bird.

Anyway, that was my babbling for the week. You can see a promo for next week's episode here. Please feel free to leave your thoughts and opinions in the comments section below and remember that this is all in fun.