Julianne Moore To Return To As The World Turns. (Updated) 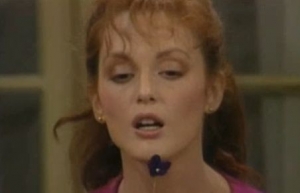 CBS has confirmed that feature film star Julianne Moore will be returning to the cast of As The World Turns to reprise the role of Frannie Hughes. At the moment, it looks like she will only be returning for a single episode. She is expected to tape as early as this week.

Moore won a Daytime Emmy award as Outstanding Ingenue in a Drama Series in 1988 for her role on the series. She played the part of Frannie and Sabrina Hughes from April 1985 until May 1988. Since then, she has gone on to a busy and critically lauded career and numerous Oscar nominations. She is best known for roles in films as diverse as “The Hours,” “Boogie Nights,” “Hannibal” and “Magnolia” among many others.

Here's a brief look back at her on the series.

Are you excited to see her again?

Moore's return as Frannie Hughes is scheduled for April 3. She'll be popping up for Bob and Kim's wedding anniversary.