ATWT: Where Are They Now? – Part Two 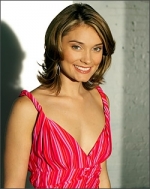 This is the final part in my “ATWT: Where Are They Now?” article, I hope you enjoy it. The past actors and actresses I will be updating you on, in this article, include: Larry Bryggman (ex-Dr. John Dixon), Sarah Joy Brown (ex-Julia Larrabee), Brain Bloom (ex-Dusty Donovan), Spencer Grammer (Lucy Montgomery), Giovani Cimmino (ex-Parker Munson) and Scott Holroyd (ex-Paul Ryan).

Since leaving ATWT in December of 2004, Larry Bryggman starred as a judge in “Romance,” a play by David Mamet. His performance in “Romance” earned him a nomination for the 2005 Drama Desk Award. Furthermore, he has a role as Salty in “Side by Each,” a comedy written and directed by Rich Allen. “Side by Each” is currently in post-production and is scheduled for completion this summer.

Brian Bloom may be remembered for playing the role of Dusty Donovan on ATWT, but to many of the women, what they remember the most about Brian is his talent as well as his dazzling baby blue eyes!

Since leaving ATWT, Brain Bloom has appeared in several TV episodes. Some of his recent appearances in television include “CSI: NY” (Dr. Craig Zimmer, 2006), “Pepper Dennis” (Gary, 2006), “Cold Case: Baby Blues” (Lee Felice, 2006) and “Smokin Aces” (Agent Baker, 2007). Not only does Brian Bloom take on character roles, but he also does voices in animated series and video games.

Lucy (Spencer Grammer) took her little brother, Johnny, and left Oakdale in December of 2006. Since her last appearance on ATWT, she landed the role of Casey in the new drama, “Greek.”

Remember Giovani Cimmino (ex-Parker)? Giovani Cimmino was replaced with an older Parker (Mick Hazen) in November of 2006. Since Giovani's last appearance on ATWT, he has gone on and landed his very first feature film in which he plays the role of Pleistarchos in the new movie "300." In fact, his role in "300" required him to shave his head.

I hope you enjoyed "ATWT: Where Are They Now? - Part One and Two!" I will do my best to keep this article updated with new information as it becomes available. Subscribe to Soap.com's newsletter to be notified as soon as new information has been added.