Luke and Noah had a good scene on Monday as they managed to summarize basically everything that's wrong with their relationship. Pity and bad habits tends to be much of it. Unlike some of the other dysfunctional relationships in town, it's not about two people competing to see who is the bigger victim, or about someone needing to be rescued, but about who can 'be there' for the other more. It's competitive compassion, which is a rather unique kind of dysfunction.

Across town, the town's latest psycho, Mick, was busy analyzing the problems of the people whose lives he nearly destroyed. Ending up suicidal on the roof with Casey and Alison, Mick actually nailed it on the head. Both he and Casey want to be victims, they need to be victims and they need someone to redeem them. Alison, the fallen woman transformed into a pseudo-saintly nurse, couldn't do that for either of them because she knows that she hasn't really been redeemed either. Although they didn't let Mick die and he's now drifting off to a mental ward, the explosion forced Alison and Casey to face the fact that they still love each other but probably weren't ready for a commitment like marriage. Is that kind of a boring way to cap what's happened? If that's all there is to it, then certainly. Casey and Ali have always been an odd couple though. When they don't actually have much of anything to do, they have casual charm, but when they're forced into a plot, they come out hollow. That's basically how it feels right now, though Tom giving him a copy of "Law School For Morons" was a nice touch.

It was nice to see more of Bob and Casey interacting. I wish they'd do that more often. I also wish they'd actually bring up Bob's past when they do it and his long litany of mistakes and misjudgments over the years to enrich their dialog. Watching Bob interact with Reid and seeing how they attempt to manipulate each other was also a lot of fun. Reid got quite a bit of play this week, annoying people mostly, but he ended up coming through for Luke and tipped off the authorities that Damian couldn't actually be dead. We briefly saw Mr. Grimaldi return to confirm this, which was actually the only real highlight of the Luke-Lily-Molly-Holden legal fiasco that consumed a good chunk of two days. Basically, it solidified the fact that Lily, Holden and Molly are now a competitive group, which was clear enough before.

Paul tried (again) to break free of his mother. It's hard to say whether it has been James or Barbara who has really done him more damage over the years. Barbara doesn't see it that way of course, which is what made her argument with Paul, Emily and Henry about her dangerous degree of mollycoddling so much fun. Paul once again rejected his share of the Stenbeck fortune and gave it to Henry. Hank and Babs ended up in bed again and they still share a very enjoyable chemistry, even if he is pining after Katie. 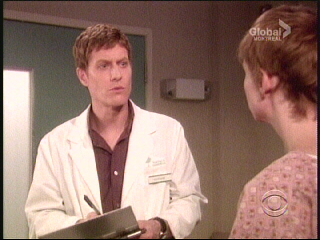 The CarJacking continued and Craig returned to the fray. He’s encouraging her to move on again. All the while, Dusty is encouraging her to take Jack and run so he can have Janet. Although I think Dusty and Janet could be really good together, I don’t understand how he suddenly fell in love with her. Lust, I can accept, and I know that he likes to swoop in and make himself useful to needy women, but love? Dusty offered himself to her, promising that he could take care of her and Liberty better than Jack ever could. That’s doubtful, but he was right about almost everything else he said. Jack is a part time husband who has been having an emotional affair with another woman. It’s not the first marriage he’s done that through either. For her part, Janet manages to refine the definition of desperation on a daily basis as she runs full throttle with the idea that she should get knocked up. Once again, Liberty, who this story should really be about, was basically marginalized, stuck in a room with a punching bag, some DVDs and a chance to video chat with Parker.

I still like Carly though. She’s a selfish, vindictive tramp, but she’s never been sympathetic, just likable, which is entirely different. Unfortunately, when she’s painted into desperate love, it just seems desperately ugly. Oh Carly, if only it wasn’t a schmuck like Jack you were pining for… As she’s said herself so many times, her relationship with him is just like alcoholism. Why anyone would confuse weak, self-destructive and, essentially, self-loathing behavior with romantic love is beyond me, but that’s what it is. To her credit, she has no illusions about her own delusions either. The same can’t be said for Jack, a man who has nothing but illusions. He’s so full of illusions, there’s no room for much else inside of him. He’s the shadow of a person, which is the only thing that actually makes him an interesting character. Jack is a wonderful example of quiet psychosis at its most excruciating and banal… but it makes Dusty and Craig look so much more entertaining.