As The World Turns’ Evan Alex Cole In She’s Out Of My League. (Including Video Clip)

Check out the trailer and let Soaps.com know what you think. The film will be in theaters on March 12. To learn more about the actor's acting credits, please visit Evan's Actor Profile. 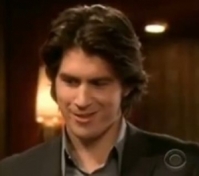 If you haven’t been getting enough of Evan Alex Cole (Lyon Hunter) around Oakdale, you’ll be able to catch him on the big screen next month.

The actor plays the role of Scotty Reese in the feature, “She’s Out Of My League.” The romantic comedy stars Alice Eve and Jay Baruchel and follows a man as his relationship with his ideal woman is slowly picked apart by his friends, family and his own insecurities. The film also features former As The World Turns alum, Debra Jo Rupp (Edna Winklemeyer).

As The World Turns Video Clip: Janet Vs. Carly