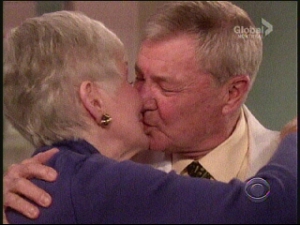 All of the plots from last week continued to unfurl this week. Since a few of them actually escalated and went somewhere interesting, I’ll restrict myself to talking about them rather than dissecting the ongoing CarJack and Janet story and its endless back and forth.

Hysterical Blindness. The blindness story took an interesting change this week. After last week’s relatively relaxed episodes, this week went straight for the melodrama again. Although Noah had some pretty clunky dialogue thrown his way, the story was helped along a lot by the growing role of Dr. Reid Oliver and his culture clash with ‘Oakhell’. The character has been written in a completely over the top way, but it actually works. It’s sort of like having Dr. House being trapped in a town full of Hummel figurines. His attempt to escape town hit a snag when he hit Kim with Luke’s car. He was forced to stay in town on some trumped up charges and Dr. Bob convinced the judge to let him spend his time waiting for trial working at the hospital. After more badgering from Luke and Noah, he finally agreed to help out, as long as young Mr. Grimaldi was kept away from him. He did, however, make one friend. Katie ran into him and charmed him enough that he agreed to move into her place with her ‘germ factory’ of a child so he wouldn’t have to stay in the hotel. This will lead to Henry getting jealous since he’s feeling pretty lonely at this point. Maybe the three of them could live together. Sort of a gender reversed “Three’s Company.” It’ll be nice to see someone who isn’t fawning over Katie though. …and also on the plus side, Bob and Kim were really cute this week.

Drowning Your Sorrows In Desserts. Molly finally came clean with Holden about the dirt she’d found on Damian and he was not happy about it. He left her in tears while he ran off to play hero to Lily. Molly turned to cousin Carly to drown her sorrows in a handful of cookies. It was actually a nice scene between them, however brief it was. It’s too bad really. I like Molly and Holden together, she makes him more likable. The rest of the time he comes off like a frustrated grocery clerk. Molly cried a lot this week, which is proof that she’s become acclimatized again to what it’s like to be a woman in Oakdale. She seemed shocked about how stupid she was acting, but Lily assured her it’s normal.

The Madness Is Contagious. Meg escaped from the mental hospital and magically tracked down Damian, broke into his room and waited for him in bed so she could kill him. That didn't go well and he ended up strangling her and then hiding her body in a trunk. Lily found her and freaked out. Holden tracked them down and they had a standoff. Meg came back to life. Damian ran off and Holden went after him. After Damian bid his son farewell, he looked to leap on a freighter when Holden intercepted him. There were all sorts of odd moments in this little episode. When Meg came on to Damian, he responded in what seemed to be earnest. It's actually impossible to know how this guy feels about much of anything. With the flip of a wrist, he can completely change and any option seems just as real as another. When anyone else lies on the show, it's obvious; with him, it's impossible to know if there really is any truth. But that's the fascinating thing about Damian. There's something inhuman about him. He's been consistently drawn as this predatory character whose actions seem to be completely driven but actually come off as totally arbitrary. He's just a dark void, a shape shifting Otherness that threatens the town. On a different note, there was a wonderful black humor with the whole standoff scene. Lily asking Damian if he had a woman hidden in the room; her incredibly insincere insistence that she still loves him; Holden's wooden glaring; Damian carelessly throwing around romantic cliches while threatening to kill someone, all created a wonderfully disjointed atmosphere. It was pure camp, and in a way that the show rarely pulls off so well, or so unintentionally.

The Mick story took another weird turn this week. Maybe I shouldn't put it that way because it's so redundant. He brought Emily out of her coma and then hypnotized her so she could act as his minion. Paul jumped from being paranoid to just confused all week and Emily clamored for sex and for Mick to move into their house. Barbara continued to get jealous of Mick for stalking Alison, who spent most of the week freaking out from his leering. In spite of how many holes there are in this story, it's still fun. And what it lacks in sanity, it makes up for in atmosphere. I'm still left wondering what the payoff will be in the end, if there is any. ...And we got to see Susan fighting with the Hughes family over wedding plans, which was also rather enjoyable.