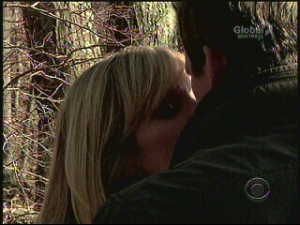 It was all about disease this week. If characters weren’t at the hospital waiting for news on tests or operations, they were talking about sickness or using it as a metaphor. Which leads one to wonder if what’s happening to Liberty is some kind of metaphor and she is just the sacrificial cow for the sins of her parents and dysfunctional extended family. It sometimes feels that way.

CarJacked. As has been hinted at for weeks, Carly and Jack finally decided to get back together. This made Craig gag when he figured it out. Although I’ve always found CarJack noxious, Jack’s scene by the water with her was perfectly orchestrated, full of the right balance of joy and misery and a heady dose of nostalgia. It was sad, quiet, intimate and finely acted. But it also had a really odd moment that says a lot about the story. When she finally kissed him in the scene, they were shot from the side with their faces mostly obscured. It was doomed in that moment. After that, once he discovered that Liberty is ill, his decision to be with Carly went back underground. Carly’s heart broke and Jack gave Janet a few bold faced lies about how he ‘really’ feels, claiming that he would never go back to her out of feelings of guilt. But being guilty is the other side of Jack’s hero complex and it’s a big part of what he gets off on. Of course, Janet has also made this all about her and what she needs. Does the rest of the world exist to these people as anything other than a filter through which they can look at themselves? All of this left Dusty on the sidelines once more. He and Liberty shared a cute scene at the hospital where he urged her to keep fighting. She reacted to her shock by trying to get Parker into bed and then running off when he was confused. sadly, she’s actually been getting pretty short shrift in this story.

Simon’s Sayonara. On a somewhat less murky note, Katie finally decided that she wanted to leave town and start afresh with Simon. That plan was short lived since her friends and family got together to convince her to stay. This didn’t stop Simon from leaving, however, especially since Katie basically insisted. Their goodbye was fairly flat, but the whole thing brought up the lingering non-Platonic feelings that Henry has for Katie and which aren’t going to go away.

Operating on Nuke. Noah and Luke were actually fun this week. Well, 'fun' probably isn't the right word, but there was a charm in them that's been sorely lacking lately. This was extended by Hunter and Maddie and their on-going, utterly awkward courtship. They spent some time with Noah and Hunter continued to mangle his bids at communication. It was nice, it was light and it was good to see people just hanging out. They really need to do more of that on a regular basis, otherwise things just don't breathe quite right. Little things add a lot. It was the first time the blindness plot didn't come off as simply trite. There was a darker aspect to it, of course, and this came courtesy of Luke. At his father's urging, he decided to threaten Dr. Reid Oliver into coming to town. Blackmailing someone you don't actually have anything on is pretty risky, but, apparently, the doctor must have some big skeletons in his closet. He came town only to discover he couldn't operate because Noah needs a lot more than a single surgery. The doctor will be coming and going but he's already developed an interesting rapport with some characters. He's arrogant and loud, but he makes Bob chuckle a little.

Playing Detective. Holden and Molly continued playing detective for mad Meg's sake. She hunted down Grady and got some dirt on Damian. Molly didn't reveal it, however, after Damian pointed out to her that she is as likely to lose Holden if the truth comes out as he is to lose Lily. He's right too. And since he and Molly are the most interesting characters in this story, any level of conspiracy between them is okay with me. It's not going to be enough though, because things are going to get a lot more complicated next week. I love watching Damian look terrified. I'm not sure why, but something about the way that Paolo does it makes it kind of delicious. The plot also showed off what a jealous hypocrite Lily can be when it comes to what Damian gets up to.

"Just tell me who the hell you are." The Mick story continued to move along its weird and winding path. There was something rather different highlighted in his character this week. He's always seemed a bit vulnerable, but he's started to seem sad and sullen. He stole a picture of Alison for his room. That gave Barbara a laugh. There's a warped quality to him and that, combined with the fact that he spends most of his time in a church tower, makes him seem more like Quasimodo than James Stenbeck. But whether he really is James or not, the story is managing to capture the weirdness and volatility that some of the Stenbeck stories for years ago actually had before his perpetual resurrections got stale. We had more dream sequences this week and more of Alison running into anxiety overdrive, but Emily is still in a coma and no one is sure what is going on.

There was actually a lot of behind-the-scenes news for the show this week. Not only will the show be getting two new young actresses to take over already established roles (Liberty and Faith), it will also be losing its Co-Head Writer. David Kreizman has been poached by ABC to become the new Co-Head Writer for AMC. The effects of this change on ATWT likely won't be evident until later in the spring or early summer, but it really doesn't bode well. Although Kreizman was often criticized during his tenure at GL, since he took over at ATWT, the show has become far stronger and more consistent. The storylines are varied and, even though flawed, gel together better than they have for much of the last few years. The Christmas episodes were examples of what Kreizman does at his best. The move makes the last few months of the series harder to guess at. Given that they have been busy recruiting younger additions to the cast, it appears that they will be more focal, or, at least, that the show is searching for more balance and variety. Of course, that could all change.

Anyway, that was my babbling for the week. Please feel free to leave your thoughts and opinions in the comments section below and remember that this is all in fun. Have you seen the As The World Turns Video Clip: Next Week's Preview?

‘Project Runway’ Preview: Darren Questions If He Belongs On The Show After ‘Flopping So Hard’