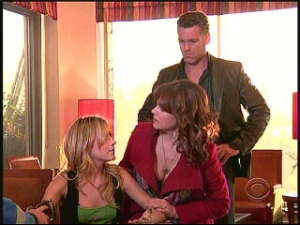 Miss Snowflake. Jack and Carly took the kids to Detroit for the Miss Snowflake pageant. Sage tried to push her parents together. They got stuck in a closet (Oh the symbolism!) and then Sage sang them “Never Surrender” (Oh the symbolism!). As Carly and Jack got close to a lip collision, Janet popped up and ruined the mood. Meanwhile, in an equally convoluted plot with more continuity problems, Liberty and Parker felt older than the other kids so they strayed off alone and got lost in the dark but managed to make their way back to the hotel by what looked like late afternoon. They proved that they really are stranger than the other children since they managed to go nearly an entire day without using their cell phones. Dusty arrived at the hotel to rescue them, stepping off of his fleet of helicopters, and proceeded to pose like Superman.

Poor Liberty. When Liberty and Parker got back to the hospital in Oakdale, they discovered, in record time, that she has leukemia. This kid goes from one topical plot to another. At least when Carly was trapped in a public service announcement masquerading as a storyline, it was well-integrated and actually added something to her character, it wasn’t as arbitrary as the afflictions which Liberty is made to undergo. It’s really starting to feel like someone is getting some sadistic jollies out of putting Libby Lu through one hellish bout of suffering after another. Maybe it will be different this time… so far, it’s been written so that it’s all about Janet. Even when Liberty heard the news, it was written and shot entirely to feature Janet and Libby was basically a prop. Janet blamed herself and prayed for help. Meanwhile, Jack had to help Carly pull the lid off of jars (Oh the symbolism!) and they debated whether or not he should leave. When he tried, they kissed. Does this mean they are fated to always return to each other like a case of VD, or is this just some random affliction created when the writers don’t know what else to do, much like they do in Liberty’s case?

Questioning. Susan was angry to discover that Emily's life has suddenly lurched into something so out of touch with reality. She couldn't help but notice that everyone involved has been acting completely out of character and none of this makes much sense. (You can watch it here.) It was one of those odd moments when it seemed like the writers digested everything that could be criticized about a plot and then stuck it out there in fictional form. It also raised the prospect that it could be the show reflecting on itself. Could this desperation to skew young and live forever really just be a loony idea?
Where has Susan been anyway? Don't get me wrong, I'm still in the minority who are actually enjoying this story, even with its substantial faults. It's not the kind of thing the show tries all that often so it's an interesting change. And this week we got yet another dream sequence, though little was explained and the creepiness continues to, quite impressively, increase with each passing day.

Simon and Katie continued to reunite... for the moment. Clarissa's presence seemed to spur Katie's jealousy a bit and she stopped being so resistant to the Aussie's charms. Although she kept trying to settle in, she couldn't shake the feeling that she should leave. This upset Margo and Henry who decided to try and make her stick around. There were numerous nice touches in this story this week, like Henry's bad accent, the giant picture of Brad being walked off the set and it's always good to see Kim. But the fact that Clarissa reminded him so much of Vienna reminded me of just how clumsily her absence has been written, or not written as the case may be. There were other problems, like Katie and Simon pretending to be the Feds to end the scam and the way Clarissa vanished just as abruptly as she was dropped in, but it was a plot purely created for expediency. The point was to demonstrate just how much, and why, Simon wants to stick around and give up his old way of life. But was it really convincing? Has Simon's psychology really been probed? Have we seen that he's changed in a believable way, or is he just an arbitrary bump in the road to Katie getting over Brad and none of this will amount to anything?

After being absent for more than a week, the Lily-Damian-Holden-Molly-Meg plot reared its head again. Meg threatened Damian once more and that tipped it for him. He went straight over and revealed that she's not been taking her meds. Meg was not happy. Damian wanted to get out of the country while the getting is good. Far more interesting, however, was Lily discovering that Holden and Molly have been sleeping together. Molly didn't reveal it too subtly and Lily didn't take it well. She's still a princess and she still wants to have her cake and eat it too. Maybe she can have the failed cake that Molly made? Even if the whole story was relegated to Friday, it still retained good energy. Everyone involved really looks like they're having fun with it.

As The World Turns Video Clip: Why...