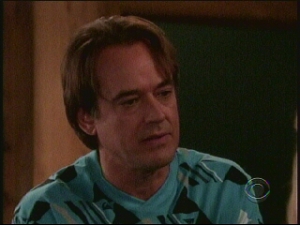 Thoughts on the week of January 4-8.

It was a big week on the romantic front in Oakdale. Breakdowns, break ups and blindness abounded. After several very coherent weeks, this week was kind of screwy.

Dusty woke up in bed with Janet. He seemed pretty happy about it but she wasn’t happy at all. Janet quickly turned to her priest to confess everything and decided it was time that she get an annulment. I know a lot of people think Janet is a hypocrite for breaking her wedding vows after being so frequently sanctimonious, but I don’t see it that way. She’s not a hypocrite, she’s a failure and those are two rather different things. She’s failed to live up to her own convictions, but the only person that really hurts in all of this is her. Jack wandered out of their marriage some time ago. Dusty certainly doesn’t seem to hold her all-too-human failure against her. Cocking his head, he kept telling her that she’s got nothing to be ashamed of. He’s quite right. Knocking boots with Dusty is nothing to be embarrassed about, but Jack on the other hand…

Jack‘s flip-flopped so many times and lied to himself, and everyone around him, about everything just to try and save face. But then again, maybe Jack doesn’t know how to be in a relationship. After all, he’s tried and failed with Carly so many times… but that’s largely because she’s someone who really shouldn’t be condemned to monogamy. Anyway, Jack made another attempt to convince Janet to stick with him, but he literally couldn’t last two minutes without being called back to Carly’s side. It took Dusty to convince her to give him another shot, but it could be too late (here’s hoping) since Jack was dragged off with Carly to a beauty contest with Sage. Even the children knew how convoluted this attempted reunion is, which is, one assumes why it’s being placed in their hands. To add to the forced feeling of the thing, Carly tried to help Jack learn to shoot straight again, literally. Then she held his gun and they did some heavy breathing together. I guess subtlety is too much to ask for.

There’s something about Craig. He used to be such a nasty guy. He still is, but it’s rather different than it was in years gone by. There’s something sad about it, something much more desperate. Maybe it’s just the way Jon Lindstrom is always giving those hang dog glances at everyone. When he was trapped in a cabin with Jack and Carly. Forced to wear an atrocious sweater from the 80s, it was sad and heartwarming. The same is true of when he made another play for Carly, telling her just how bad an idea it was for her to hook up with jack again. Craig might not deserve her, but Jack certainly doesn’t. Craig made this abundantly clear to Jack when he asked him not to ‘victimize’ Carly again. While Craig was certainly overstating things, he’s basically right.

The romance wasn't all grim though. Katie came out of the apartment again and decided to get back to work. She's recovering from her grief pretty fast, maybe a little too fast, even with the Christmas miracle. Simon has been sticking around and working at Al's as their most inept waiter. Since he's so poor, he had to take her out for dinner there and serve her himself. It was cute, but will it last? One of his old cohorts, Clarissa, has been sniffing around. It feels like it will only be a matter of time before he goes back to his old ways.

Poor Luke and Noah. Even more than usual, they really seem to be an unfunny parody of soap cliches stranded in the middle of a soap that has a completely different mood to it. Noah got the idea to seek some radical treatment for his busted vision. Luke tried to be supportive and tried to cheer him up by letting him know that he'd finished his movie for him and it won a prize. Noah was furious. Luke doesn't know why Noah can't see how he did all of this all for him. "I can't see period. I can't see," Noah said. He could have gone on, "Can't you see that I can't see? See? Don't you see what I see which is that I can't see that you can't see what I see? Even if I can't see I can see that you see that I can't see and seeing that makes me realize how much I need to see but you can't see that." While the dialogue hasn't gotten quite that bad, it's been getting dangerously close. I'm not sure why. No one else's dialogue is that appalling.

Other successful romances... Molly and Lucinda trading insults was great fun. They actually got some good dialogue. The source of this latest round of enmity comes from the fact that Molly and Holden are getting close again. They actually got intimate this week, with candles and everything. Holden decided to take the plunge after it looked like Lily could be pregnant with Damian's child. It turns out that she wasn't, which, strangely enough, he interpreted as a sign that she should be. This idea seemed to terrify her, almost as much as Damian was terrified when 'reformed' Meg began threatening to kill him. Meg was deliciously vindictive and managed to knit booties while doing it.

Damian isn't the only one facing danger though. Everyone in Paul's circle is stuck in weirdness. Paul suddenly decided that he's been mistreating Emily and ran to see her. Unfortunately, she'd discovered Mick was obsessed with him and confronted him about it. Mick knocked her out. Of course, Mick/James insists that this is all about getting back together with Paul and having a chance to make things right between them. He even wanted to hold a family dinner with him. Nothing became clearer in this story though. It isn't any clearer why Barbara is having such an easy time going along with him, or why he is so interested in Emily, or what Paul and Emily's emotional lives are really like. Maybe not of that is supposed to be clear, but it was persuasively moody. Unlike a lot of viewers, I actually like this story, on a certain level at least. I think it has intriguing possibilities as far as exploring these characters and their pasts, something which could be very useful as the show moves to its conclusion. Unfortunately, much of the time, half of the plot is interesting and the other half feels like an undeveloped sketch.

Anyway, enough of my blathering. Please feel free to leave your thoughts and opinions in the comments section below and remember that this is all in fun.

Have a lovely weekend everybody!