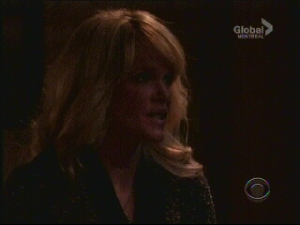 Mick stays in the shadows (Soaps.com)

Thoughts on the week of December 28-January 1.

After last week’s strong holiday themed episodes, you can forgive them for things being slightly underwhelming this week. Not that it was a bad week, it was just strikingly different. For one thing, most of the week was cast under a pallor of darkness. Tuesday’s episode even felt suspiciously like a horror movie. There were all sort of gothic touches like meeting in the church tower, the extreme lighting, the power outages, the ice storm and the sense of isolation which swept throughout town.

Carjacked in the cold. Craig dragged Carly off again. Jack went off in pursuit again. They wound up trapped in a cabin with some candles with Craig suffering from pneumonia and babbling. He warned Carly again that Jack is after her, even though Jack seems to be in denial about it. Craig insists that Jack is bad for Carly because he’ll never understand her. Jack misinterpreted this and thought that he meant that he was just too judgmental so he promised Carly he wouldn’t be judgmental anymore. Craig just might be right though. Even if Jack does understand Carly, he doesn’t understand himself, and that’s what’s at the basis of most of his relationships. He flips between a set of attitudes. He’s either self-obsessed but incapable of seeing himself for who he is, or he runs from himself and tries to help other people as a way of creating a ‘heroic’ self which he knows isn’t real. That’s because everything Jack does springs from intense fear and anxiety, particularly about the power of women. It’s for this reason that he obsesses so much over Carly, an independent woman who frequently finds herself in danger. Running after her, attempting to save her and show how he can control things, however briefly, allows him to feel masculine, which is apparently exactly how he doesn’t feel around Janet. Janet can run things and she doesn’t need to be rescued (neither does Carly, but she always creates the possibility that she might need to be). So who is the real Jack: Is he the macho blockhead he pretends to be around other men, or is he the whiny little boy he acts like around women? I’d put my money on the latter.

The end of Janet and Jack? Jack did share a wonderful scene with Janet early in the week though. As usual, Julie Pinson and Michael Park were wonderful and you could feel their hearts breaking. I'm not the biggest Janet fan in the world, but even I think she's too good for him. Besides, she and Dusty have some luscious chemistry. Since Jack missed their New Year's date by running after Carly, she wound up spending the evening with Dusty... and the night too. I really enjoy them together. They have something fresh. Maybe she shouldn't be cheating on Jack but, as he's already admitted, he's been pushing her in that direction for quite awhile. Besides, Jack's been having an emotional affair with Carly for the majority of his marriage to Janet, and isn't that really worse?

Oakdale Gothic. Nancy popped up to give Casey the ring Chris gave her. Between her and Bob, they've been working hard to keep Casey as the heir for all things Hughes. It's nice that they keep that going, even if they seriously underused Nancy in her very brief appearance. Casey ran around like a puppy dog after Alison. They were cute, but what was more intriguing was her still totally cryptic relationship with Mick. He dropped a few strange hints this week. He told her that he feels like he has two people, or forces, in him, fighting for control. Does this mean that James hasn't gotten younger, but he's possessed the body of a younger man? There's a whole Jekyll and Hyde thing they've started to play with which could be fun. His intentions towards Paul are a bit mysterious too. He wants to get Emily and Meg out of Paul's life. Barbara has started to become oddly supportive of this. She doesn't like Emily, but things with Meg are a lot more ambiguous, although it's not being written that way. Anyway, the relationships between everyone in this plot are being rather sketchily written at the moment. Paul and Emily are suddenly crumbling, which has hardly been examined, and really annoys me because I thought they were a refreshing break from Paul and Meg. Barbara has shifted her feelings far too quickly to be entirely believable.

It wasn't all romantic messes and gothic weirdness though. We also got to see Hunter and Maddie flirt and we discovered that his first name is Lyon. Anyway, that was my babbling for the week. Please feel free to leave your thoughts and opinions in the comments section below and remember that this is all in fun.

Have a happy New Year everybody! Don't forget to check the ATWT News Room this weekend for our Saturday Teaser poll!

As The World Turns Video Clip: A...