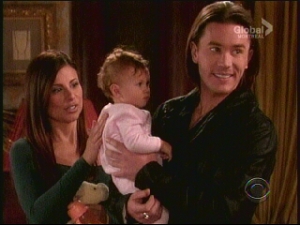 The truth about Mick. Mick confirmed what Barbara feared and what many in the audience have been dreading – that he is James, risen from the dead once more, but far younger thanks to his miracle drug. I know it’s silly and hardly new. After all, it’s not like they’re bringing back John Dixon, radically turned young with a new face, to get some final revenge on everyone under the guise of James. All the same, I don’t mind this story so much. Is bringing James back from the dead again really any less imaginative than reuniting Carly and Jack for the umpteenth time or putting Simon and Katie together again? At least the Mick thing is weird enough that there seems to be something more to it, namely his entirely mysterious relationship with Alison. I keep assuming (and hoping) that there is something more to this story, that Mick could still be someone else. After all, as many have pointed out, why would he get younger and look like someone else entirely? Does this mean that if Barbara gets younger, someone else will play her? Is James/Mick going to take out her brain and implant it in Alison or something?

On a different level, it’s become an interesting role for Pelphrey and his choices are getting more curious. Although he’s best known for big, showy emotional stuff, he’s downplayed everything, which is a lot harder to do well. Instead of blowing up the way they kept making him do on GL, which is about as easy for him as it is for a dog to sit when commanded, things are more complicated. Jonathan was all surface; there really was nothing else. Mick is a much shadier character and none of the lines which mark out his character are very clear. Pelphrey’s started incorporating bits of Anthony Herrera’s mannerisms as well, which is also interesting. If only they would give Mick more scenes with Paul…

Romance in the Hughes family. Ali and Casey went out to get a tree. They almost kissed several times, but she's being very cautious, as ex-porn stars are known to be. Alison and Casey have actually been cute lately. It's almost enough to make me forget what a twit he usually is. I find him likable, but that makes him no less of a twit. He popped the question to her, which really came out of nowhere and nearly scared the holiday spirit out of her. Meanwhile, Bob and Kim actually got some well-deserved story time and they talked about their upcoming trip to the Greek Islands and their anniversary. It was a nice tie in and it could potentially form an interesting point of contrast between the upcoming wedding and the 25th anniversary of a wedding for two very different generations of the same family. I'm curious to see how they play this out. It was also nice to see Tom and Margo, however briefly. Nancy will pop in next week.

Mad Meg. Damian attempted to seal Meg's fate by sneaking into her cell, bribing a guard to keep his visit quiet, and then taunting her to explode just before her hearing. Is Meg really over Damian now? This is Meg after all, she can take a lot and still keep coming. She really did seem put off by him when he paid her a visit though. Meg had a meltdown at the hearing and the judge remanded her for observation. As she was being led away, Paul came to her rescue, which was startlingly easy, and then hid her in his wine cellar. That proves she isn't really crazy since everyone knows you keep your ex-wife/madwoman in the attic. It wasn't long before Meg popped out of hiding after hearing Eliza crying. Emily clearly wasn't pleased to see her. Meg was territorial. Paul was either naïve or really nonchalant. Emily was worried and insecure, maybe more. It's not entirely clear since most of the time they spend on screen tends to be plot dictated at the moment. Both characters have changed enormously over the past three months, but, lately, when they have scenes, they only kiss or talk about whether or not they should trust Mick. It's enough to make me worry about their future as a couple. Putting them together is one thing, and consistently bringing up their past is a nice move as well, but they need a little more room to develop together and it's not quite there.

The ghost and Santa Claus. Brad's ghost story came to an end. The timing was right. After Katie kicked Simon out and said she only wanted to spend her life with Brad's spirit, the Aussie hung around town and remembered his past with Katie while Brad got some help from Santa to finally say goodbye to his family and friends. It was sweet and compact and it hit all the right notes, proving that they really can make wonderfully nuanced and well-crafted episodes that don't miss a beat. Also a nice touch was the fact that Santa kept throwing in a little Yiddish. It was a lot like a Christmas special from the 1980s, which I think was the general idea. That extended to the rest of the holiday episodes, that peculiar time of year when everything happens fast and is explained even faster and most of what happens quickly melts away like snow. Even Noah returned from his exile. He didn't exactly make up with Luke but they were fairly civil. Of course, it was also that time of year when child characters are given things to do before they can vanish again to rapidly age by the spring.

Anyway, that was my babbling for the week. For a peek at next week's episodes, you can check out a preview here. Please feel free to leave your thoughts and opinions in the comments section below and remember that this is all in fun.

Have a happy weekend everybody!

As The World Turns Video Flashback:...