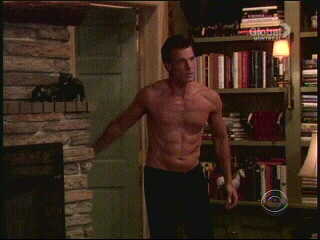 As The Word Turns

The show’s been consistently better over the past few weeks than it has been in months. This week was no exception. Things were focused, the dialogue flowed well and hints of new developments were everywhere.

Bachelor Party. Craig‘s bachelor party was great fun. He has no friends so he had to drink with Paul, Dusty and Jack. Sadly, it was a little short, but at least it even gave Dusty the chance to grab a few laughs, which is something he’s rather good at when he has the chance. Dusty was actually spreading a lot of his own unique charm this week. He’s developing a rather intriguing relationship with Janet and Teri. Although another tale of a man stuck between two sisters isn’t exactly the most desirable thing at the moment, it is providing an amusing contrast to the Craig-Rosanna-Carly situation. Dusty giving Janet his scarf to dry her tears was a nice touch. Jack looking at her like a puppy dog in the rain when she arrived at the wedding with Dusty was also nice. Since we still don’t know much about Teri, it should be interesting to see how she deals with her jealousy (and she’ll have plenty of opportunity).

The wedding. As Rosanna and Craig‘s wedding day neared, they both got nervous, though their reasons aren’t exactly the same. She worried about whether he was still the man he used to be beneath his new veneer. He worried that he still had too much Carly in his system and had to get her out fast. I guess if he’s been watching Jack for all of these years, that’s not such a foolish idea. Asking her to sleep with him so he could move on was a foolish idea, however. She challenged him to it to see if he was really such an SOB and he backed out. Whatever magic Carly carries in her pants, it wasn’t quite enough. It’s been interesting to see how indecisive Craig has been lately. I really don’t know what to make of this vulnerable side of him. Does he love both sisters equally or just differently? I’d vote for the latter. He was a different kind of person with a different history with each of them. The question of whether he’s changed or not was a bad one. He hasn’t changed, he just has different personalities and it’s never certain which one will show up. In both relationships, he was trying to erase the past. By marrying Rosanna he could erase trying to kill her. By sleeping with Carly he could erase betraying her by betraying the person he betrayed her with. At least for the latter, the punishment fits the crime. What was ultimately at stake in his relationship with Carly, and most of her relationships for that matter, was sex. As she explicitly spelled out, she does, and likes having done to her, things most women won’t allow. That’s ultimately why Jack will never be happy with the ever so pious Janet – she’s just not pervy enough.

Rosanna leaving. In the end, Craig finally told Rosanna that he was sorry for stealing a few years of her life. That was good enough for her. She rapidly changed, decided that everything was better and it was time for her to run off and start a new life. She even has a new job as the CEO of a car company in Germany. The sisters said a sad goodbye. She also sad a sad goodbye to Johnny and then left. I'll miss Rosanna, even if her time on the show over the past few months was kind of a mess for her character and riddled with some holes, they did try to tie things up tight near the end. Cady McClain says her departure isn't necessarily permanent and she might be back at some point.

Paul and Mick. The weirdness which is Mick Dante continued. Paul decided that it was high time they get an actual scientist to look over his work. That was delayed by other things, but Barbara spent the week doing some checking up of her own. She swiped one of Mick's glasses and had the fingerprints checked. It turns out that they belong to James after all. But if Mick is James, why does he seem so transfixed on Alison? Did they know each other in her porn past? It's rather perplexing. She spent a lot of the week giggling with Casey as they put toys together. It was kind of cute. It was also kind of cute to watch Hunter and Maddie together. She was impressed by how he can tickle the ivories so she asked him to do it for charity. He refused.

Meg's story hit another peak. After she attempted to threaten Lily with some glass, Damian, in one of his shirtless scenes, wrestled her to the ground. He then had her committed, on a short term basis. There wasn't much Holden and Molly could do about it. (What's with Molly acting like everyone's conscience lately by the way?) She ended up calling Paul for help. He vowed to do so, even though it clearly irked Emily. It was actually nice to see Paul and Meg together for a brief moment. He's been in kind of a vacuum from most of the other women in his past lately.

The ghost is starting to fade. For those who care, the ghost story won't last too much longer. I've been on the fence about it. At first I thought it was hackneyed, then I warmed up to it more. That was thanks mostly to Trent Dawson getting back to the things he does best. The graveyard scenes this week finally gave Brad the pathos he's been bumbling toward since he died. It's sad to see his heart breaking the way it has been.

Dreams. But what made me really happy this week was that there were actually flashbacks and dream sequences. Two dreams sequences at that. I was amazed. I'm old fashioned, I like that stuff. Even though it's silly, it's part of the charm of the whole thing. The dreams weren't especially interesting or well-executed mind you. One told Rosanna what she already knows she feels about Craig but doesn't want to admit. The other just confused Alison even more about Mick, and she was already confused about him anyway. All the same, they added a little something extra to the show.

On the news front. As The World Turns is still in the cancellation dock, but the show's producer, Chris Goutman, gave a startlingly optimistic interview recently. He made it clear that, in spite of the cancellation, they have no plans at the moment of treading down the road to nostalgia. That could change eventually, but over the next few months, the series is supposed to bend more to youth oriented stories as well as the return of CarJack and a few other things. "It is absolutely imperative that we regenerate our young group of characters if ATWT is going to have a life elsewhere. Going back to the days of Irna Phillips, it has been the signature of ATWT to tell youthful and relevant and timely stories. That’s not going to stop now," he told TV Guide.

I'm on the fence about what they should do. Should they try to bring everything to closure, the way they tried to on Guiding Light (it didn't work that well), or should they let the show end the way it started, in an open kind of way without closure? Simply ending, the way that "The Sopranos" did? Personally, I hate 'closure'. I think it cheapens things emotionally and reduces complexity. I also think that it betrays the basis of the genre, which is to be open-ended and inconclusive, a work in progress that can't really be summarized. In that way, soaps are closer to life than anything else on TV. Everything in soaps is provisional and they should finish as unfinished as they are at any given moment. But in the end, what I really care about is just that, whatever they do, they do it well. I would actually argue that what they seem to be planning at the moment really is more faithful to the original vision of the show than a nostalgia fest would be, which isn't to say that it's what people really want, but that only underlines the problem they were facing in the first place. The real issue is what it's always been – balance.

Anyway, that was my babbling for the week. For a peek at next week's episodes, you can check out a preview here. Please feel free to leave your thoughts and opinions in the comments section below and remember that this is all in fun.

Have a happy weekend everybody!