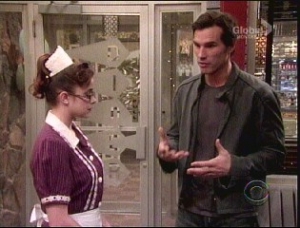 Thoughts on the week of December 7-11.

Since this week was largely overshadowed by the sad news that the show has been cancelled and will cease airing on September 17, 2010, much of this blog will concentrate on that.

First, here’s a rather brief look at the week that was.

Lily and Damian jumped at renewing their vows. They probably still had them fresh in their memories. Then he ate some poisoned wedding cake and collapsed, leaving behind enough clues to make it look as though Meg had gone completely mad and tried to kill him. It was an expertly plotted scheme on his part and, for the moment at least, everyone seems to buy it. Everyone played it out well. It was finely paced and hit most of the right emotional notes. Lily and Meg even had a catfight this week, which I know many people have been waiting to see.

Teri got excited about running a restaurant but Dusty disappointed her by hiring her sister to be the new manager. Janet spent most of the week fighting with Jack, who spent the week cowering and sneering to various people before punching Simon. He did, however, share a very nice scene with Liberty at Brad’s grave. That wasn’t enough to reconcile them, but it was still moving and a positive move for both of them.

It was really nice to see Casey and Bob together. It was cute, even if all they did was talk about Casey getting back with Alison, which isn’t the most exciting thing in the world. Casey and Alison got lost in the woods while releasing the spider that belonged to a deceased patient. Their scenes in the hospital talking about it were also nice and it makes me wish there were a lot more small, detailed, purely character based scenes like that in the script on a regular basis. Mick stalked after them. He also flipped out at Barbara and stole some of Paul’s blood. Barbara discovered a clue to suggest that he is somehow connected to James (or is James). Paul, although he’s clearly worried, still came off as being kind of aloof.

Rosanna walked in on Craig kissing Carly. He managed to talk his way out of it by explaining that he was only testing to see if he still loved her. He convinced Carly of this and she ended up convincing her sister… for the moment at least.

The most fascinating moments of the week, however, were watching Brad possess Henry. Seeing Trent Dawson mimicking so many of Austin Peck’s mannerisms was a lovely acting exercise and, mostly, rather entertaining. Less successful was when Brad bumped into another spirit drifting around town. She couldn’t explain much to him, which was too bad. They could have really played on that, bringing up other ghosts from Oakdale’s past and giving a ghost’s view of the town. That could have been really interesting, but they dropped it fast. Vienna also popped up again at the end of the week to complicate things. Simon kept cuddling up to Katie. Jack managed to get Margo to back off on the Aussie. This only made poor Brad more distraught. Dead but sticking around. Stuck in a kind of limbo which can’t last for much longer. That’s probably how most of the cast and crew feel about things at the moment.

The Cancellation. People have been understandably angry and hurt by the decision. It's a little more muted since this is the second major loss of the year, but it still stings. Soap fans have a more profound relationship with their shows than any other viewers do. As The World Turns has fostered long term relationships with its devoted audience, who have been willing to stick with it through good times and bad. There's a profound sense of heartbreak and loss out there. For many, losing a show with a history like ATWT's isn't simply losing a TV show, it is losing part of their own identity. Even if the entertainment industry sells people dreams and sentimentality, that's never stopped it from being one of the harshest and least sentimental businesses around. Like a lot of people, I'm a little baffled, and even a bit offended, that they would chose to make the public declaration of the show's demise two weeks before Christmas. CBS CEO Les Moonves seems adamant that the days of soap operas are over. "They've had long and distinguished runs and their days are over," he says.

Why? Like a lot of people, I have to remind myself why this happening. It's not malicious after all, it's just business, and from a purely financial point of view, it's fairly rational. Daytime just doesn't make money anymore, or not enough to make it desirable. Even if advertising revenues are up in Primetime, it is still a struggle to sell space on Daytime. I'm sorry for how harsh this sounds, but to put it bluntly: The audience is steadily receding and, very literally, dying. Soaps lose thousands of viewers a week to mortality and those viewers are not being replaced the way they once were. There's no turnover, only ratings decay, and it has been steady for more than a generation.

Vs. GL. Ever since Guiding Light was cancelled earlier in the year, it has been widely expected that its sister soap would follow the same fate, sooner of later. The problems afflicting the two soaps aren't entirely the same though. GL had far more issues with their affiliates and with scheduling as well as a somewhat more homogeneous and less lucrative demographic base. Advertising revenue for that series was so bad that it's widely suspected that ad spaces were simply given away near the end just to fill up the time. Their ratings were bad for far longer than ATWT's and showed virtually no signs of improvement no matter what they tried. Whether it was creating a new production model or bringing back old characters, both strategies served to further alienate the audience.

Ratings. ATWT's ratings currently hover close to two and half million, more than half of which are in the undesirable 50 + age demographic. The majority of the more youthful viewers (two thirds of them) are in the 34-49 age range. One of the things which people often don't understand about ratings is the degree to which demographics really make a difference. If the audience was five times what it is now but it was entirely people in their 60s - 80s, the show's real worth in terms of money would still be worth less than if they had a million viewers in the their twenties. Soap operas cost a lot to produce and advertisers are increasingly unwilling to pay a desirable amount to run their ads within them. This, coupled with the fact that the deliberately disposable nature of the genre and its perpetually proliferating content, makes it difficult to re-purpose for other sales opportunities (like DVDs). That doesn't mean that some re-purposing can't be done. The Bold and The Beautiful and The Young and the Restless have both made scads of money by being sold and marketed to foreign markets, something which Procter & Gamble has been notoriously unwilling, or incapable, of doing for their soaps with much success. Even though ATWT has enjoyed some success in the Netherlands, it's too small of a market to make much difference.

General decline. ATWT's decline has been gradual and apace with the decline of the genre in general. The audience is a fraction of what it used to be, which has less to do with quality than it does with the changing market context. When there were only a few networks, and when far more women worked at home, they could rake in viewers based largely on the fact that there was so little competition. With the coming of cable, satellite and the internet, the diversity of choice has caused an enormous erosion of viewership for network television in general. Because of greater shifts in their key demographic (women), soaps have suffered greater losses. There are other things at work though, including changes in taste. Soaps have had a slow death in that respect, unlike say, westerns, which also once dominated radio and TV and then fell into sharp decline before vanishing.

Content issues. This doesn't mean that content didn't also play a determining role. The long term health of any soap has always been determined by its cross generational appeal and its ability to constantly expand and grow its audience. Soaps succeeded for so long because they became enshrined family traditions passed on from generation to generation and each generation was given a new set of characters to become enthralled with. For decades, ATWT kept that extraordinarily delicate balance, but things have stumbled subsequently. Series vets have been relegated to rare appearances and plots which receive next to no air time. This seriously hampers the creative strength of the show, but it makes marketing sense. A story about Bob is unlikely to bring in many new viewers. However, if one isn't going to balance things between new and old, one can at least concentrate on bringing in the new. Days of Our Lives has managed to do that and that is why it has consistently kept afloat as one of the only soaps to actually attract new viewers rather than battle to keep old ones. Without that, there's no way the genre can survive another generation. ATWT took some steps in a positive direction, bringing in a new range of viewers thanks to the Nuke plot, which generated plenty of free publicity, and the far stronger youth oriented stories around Gwen and her friends. With her departure and Nuke's persistent fizzling, however, whatever was gained in that period was largely squandered afterward.

Until the end. The next nine months will place the series in a position which a serial is never supposed to be in – resolving everything. That's an enormous burden to put on the writers, and, potentially, a fascinating chance to see what they'll come up with. Nine months is a long time to tie things up. The majority of television shows don't even last that long. This means they could make it progress naturally and organically, the way the show once moved before it tried its hand at rapid pacing. Since there is little likelihood that the series will survive (and believe me, I hate to say that, but I'm being realistic), I'm cautiously optimistic that they will try to give fans the kind of send off they want, and which the show deserves. Then again, at this point, they really don't have anything to lose so they could go completely crazy. What kind of ending do you expect?

As The World Turns: Saturday Teaser...