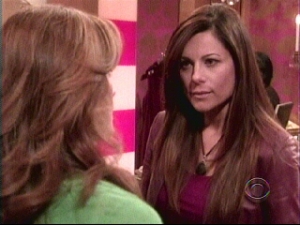 Thoughts on the week of November 30-December 4.

It was a strong week which weaved together the various stories more tightly than usual, never focusing too long on one over another.

Sleeping in the guest room. Damian continued making things more complicated. While he moved in with Lily, Meg continued to move in on him, even attempting to seduce him in Lily’s room when she stepped out for a minute. Although Lily returned and caught them, he managed to cover by making Meg look crazy, which wasn’t particularly hard. To make up for this, he decided to prove his devotion to Meg by asking her to move in with him at the Lakeview. She didn’t need much convincing. As she dragged her baggage through his door, he slipped off and asked Lily to renew her vows to him. Lily was jubilant and wasted no time rubbing this latest development in Meg’s face. Meg flipped out and shoved her rival to the floor. Molly and Holden were left on the sidelines to wonder what was going on. If anyone told me a few months ago that I would be enjoying this so much I don’t think I would have believed them, but Meg’s madness gets more intense every week. This week it wasn’t just desperation either. It was tinged with a certain vulnerable naivety which made it interesting. Just watching her ogle Damian as he got dressed on Monday was a display of frantic love gone wrong that was utterly fascinating. Also intriguing has been Damian’s change of tact. Instead of his usual, fairly overt way of manipulating people, he’s exploiting Meg in a much more expert way, allowing her to consistently make herself look bad. I actually feel bad for her.

Carjacked on the way to the altar. Craig and Rosanna tried to putter ahead with their wedding. This was derailed a bit when Craig found out that Jack was staying with Carly. He insists it’s only for the kids, but Craig sent Janet after him to make sure. The married couple ended up battling and he beat himself up some more. She pulled her punches when she should have really let him have it. Even if I’m not wild about Janet, he’s still treated her pretty shoddily. They kind of made up by week’s end and Carly went to have words with Craig. He ended up kissing her. He’s confused, but the reasons for that aren’t all that hard to discern. In all of this, I can’t shake how odd I feel about the way Rosanna has been written for the past few weeks. There hasn’t been that much there, which is a shame because she deserves to have her feelings in the situation flushed out more. There’s a lot more to Rosanna than just loving Craig and feeling bad about her sister, but that’s how she is being portrayed at the moment. Of the three of them, her position is probably the least straightforward and most awkward emotionally. Everything she does seems to be like walking on eggshells. But this week she did have a little more chance to hint at how she is feeling, though it would no doubt help if she had someone other than Carly and Craig to interact with. Can’t she talk to Paul?

Blindness. Noah was sent away to rehab. This means a Nuke break, for awhile at least. Luke decided it would be best to send him away for awhile to heal on his own. He's probably right, but it happened pretty quick. At least this will avoid simply replicating another 'nursing your loved one back to health' story.

Dante's Infirmary. Mick got another five minutes of screen time and it keeps getting weirder and more intriguing. Emily is getting desperate to get knocked up again and asked for his help, much to Paul's chagrin. Barbara has also become desperate to look and feel young in a bid to lure in Henry and has agreed to act as a guinea pig. Mick dropped all sorts of odd hints this week that suggest he has intimate knowledge of everyone he is dealing with and has known them for many years (which would be impossible considering his apparent age). This has led lots of people to wonder if he is taking his own miracle drug, or undergone massive plastic surgery, and is really an older character we haven't seen for awhile, someone like James. Although that's certainly far-fetched, it's not that far-fetched for a Stenbeck story. Then again, they could just be trying hard to send out a lot of misleading suggestions. Mick's unexplained headaches, nosebleeds and strangely wooden demeanor could also suggest that he has a severe mental illness. I'm hopeful that there is more to it than either of these suggestions.

The Ghost and Simon Frasier. Simon hid out at Katie's. Brad threw repeated hissy fits and tried to haunt him away. He even tried to get Henry involved again and Mr. Coleman got arrested once more. Henry really just wanted to be left alone with some pie. Barbara reached out to him but he pushed her away. He might not be able to stay away that much longer. Little does he know that Vienna is on her way back. I don't blame Henry for being so exhausted dealing with Brad. I'm getting exhausted. I know being invisible to most people must make you want to scream, but he still does it an awful lot. It only got worse as Simon echoed Brad's sentiments and got closer to Katie. She finally even admitted that she likes having him around. He is nice to have around, but he still looks really uncomfortable most of the time.

Somewhat more randomly, Dusty ended up buying Carly's share of The Metro. He obviously did it to appeal to Teri. There's something very cute about them and I still think they could be a surprisingly interesting couple.

Anyway, that was my babbling for the week. Next week looks rather tantalizing. You can check out a preview here. Please feel free to leave your thoughts and opinions in the comments section below and remember that this is all in fun. Have a happy weekend everybody!

As The World Turns Video Clip: Where...