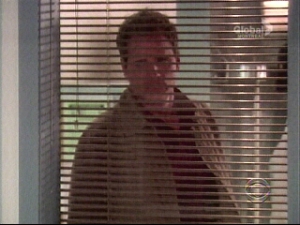 Brad died. There are good and bad things about that. One good thing is that, after a few months of substantially altering his character so he was ready to die as a ‘hero’, his death bed scene was a little more like the Brad of old. He was dopey, a bit charming, and made some bad jokes. Now he’s dead, but he’s not gone. He’ll be sticking around for awhile as a spirit. We got a glimpse of this at the end of week when Henry began seeing him after receiving a whack on the cranium. He’ll be leaving behind a big void, especially as far as the humor goes. Most of the show’s comic relief has been spread between Brad, Katie, Vienna, Henry and, lately, Audrey, but now that seems largely gone. It will be interesting to see how the writers work with what’s left. Henry’s fairly unsympathetic at this point. Even if one doesn’t hold him accountable for what’s happened, he’s been rendered so ineffectual and pathetic he’s almost become a painful presence.

Whoever one believes about the behind-the-scenes reasons for why Brad has been killed off, the impact of what it means on screen has been even more baffling at times. The death is supposed to lead to numerous other things, most notably Jack’s next major plot. Whether that will make it worth it or not is still up in the air, but, so far, things are just odd. The grief around Brad is weird. Part of that’s because so many people in Oakdale really didn’t get along well with him so we weren’t treated to the hypocrisy of a lot of over-the-top grief, but what there’s been has been mostly cold. Janet broke the news of his death to Liberty in silence at a distance. I’m guessing that was supposed to be respectful of the emotional intimacy of the moment, but that doesn’t explain why we got to see so many people learn that Jack pulled the trigger and why it came off so undramatically every time.

Jack, who has been pretty repressed for quite awhile thanks largely to Janet, finally broke out of it. Michael Park was extremely good at showing not simply grief, but a very specific and tightly nuanced kind of grief. He never let it get too showy and he allowed it to be complex. Although Jack is miserable, he isn’t pathetic. Instead, it’s an angst ridden suffering which is full of ambiguity. Since this is what’s going to be fueling his storyline for some time, it’s important that they retain that. He was completely infuriated by the lack of any real clarity in the situation. This leads me to guess that the death has been slightly downplayed to accent Jack’s mental state, but it’s actually led to a lack of necessary tension, Jack blamed himself but no one else will, not even Craig. Even when Jack was pointing a gun at him, Craig wouldn’t lay the blame on him, but that didn’t stop him from pointing out that part of this mess was the way Brad and Jack act in general. It’s helped to demonstrate that Jack may be the worst, most irresponsible cop in Oakdale history. As usual, I got a kick out of Craig. Sometimes it seems like he’s the only person who can see anything realistically.

There were other places where they failed to deal with the grief successfully. The show really moves too fast over everything to handle it well. Jack and Katie both tried to stop time, but things flew by anyway. If it has been any faster, it could have slipped into farce. It wasn't even that things felt fast paced, it was just that there were holes in everything. For instance, on Friday, everything with Margo was abrupt. Her conversation with Katie seemed to be purely perfunctory and devoid of any emotion or history. It was like she was following a manual for how she should behave. Katie's experience of the entire thing was largely broken down into two or three facial expressions. She mentioned more about her experience than they actually showed. Then Margo's standoff with Ralph and the entire thing with Dusty was equally full of holes. It was literally like they simply edited out fifty percent of the show and pieced together what was left.

At least Kim showed up. They did a special on Brad for "Oakdale Now." The strange thing about it was that it was a clip show, but the show itself didn't really show any clips of Brad. Maybe that's a good thing since some soaps have the habit of using a lot of flashbacks when a character dies and, so far, they've resisted that easy strategy. The situation just made it more glaring though. There were other odd things too, like Bob popping up the way he did, which actually proved to be a bit distracting.

Although most of the week was concentrated on the demise of Brad, some other things occurred. Audrey ran off. I talked about that last week so I won't repeat myself. Lily asked Damian for an annulment and he fought her on it, pointing out the Holden has hardly been fighting for her. Everything Damian said about Holden was right, of course. He clearly isn't all that interested in Lily. He had some feelings for an idealized Lily who really doesn't exist. Even Lily finally noticed that she doesn't know who she is anymore. Just when I was getting so tired of her moping around, she started to snap out of it and get some backbone. After Maeve made her think that she was sleeping with Holden, Lily decided she was better off alone – she is sick of acting like a woman who needs a man. Hopefully, she really means that. I'm sick of her acting like a woman who needs a man too. Even if I think she could be fun with Damian, she needs to get a life of her own even more. The crises in character was also shared by Maeve, who has been written entirely to suit the situation rather than the character. First she was cowering and needy, then she was independent and strong headed and then I don't know what. She kept leaping around like the character was just being made up as it went along, but then again, I guess that's all she was.

On a more positive note, Carly is back next week and Tom Pelphrey will arrive within two weeks. Anyway, that was my babbling for the week. Please feel free to leave your thoughts and opinions in the comments section below and remember that this is all in fun.