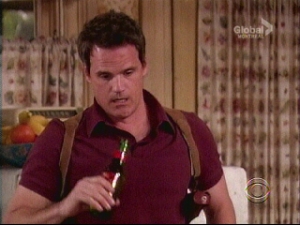 Thoughts on the week of October 12.

I’m happy to say it was actually a very strong week. Even if the storylines aren’t all that great, something felt far more present this week than it was last, and that’s character. Everyone seemed more involved in their own plots somehow. It was small things. Scenes which were played a bit against type or with a bitter humor that let them ring a little more clearly. Things gelled really well, not because there was any big event uniting them, but because each episode was about character conflict more than the broader narrative set-up.

Craig and Rosanna’s passion was palpable. They continued giving in, regretting it and refusing to do it again, then doing it again. Parker caught them out several times. They thought about coming clean with Carly to avoid making things worse, but Craig wound up offering Parker access to his trust fund instead. The bitter-sweetness of the situation was well-mixed. Everyone feels awful, but everyone also feels compelled to give in to their desires. Whether it’s nasty or not, Craig and Rosanna are still hot together and the repercussions of their affair could be far-reaching and provide extensive material for the future. That’s what I’m hoping anyway. There were other good things about this story. Craig always gets snappy dialogue and, when he’s in a pinch, can produce a fascinating kind of volatility. The uneasy position he is in with Rosanna also provided Jack with plenty of opportunities to be snide, which is usually entertaining. Another side benefit of it was that it allowed Parker to seem purposeful and he also got some nice lines in here and there.

Parker spent most of the week trying to help out Liberty since everything is going wrong for her. Emily allowed her to sleep through her alarm and miss her SATs. She felt overwhelmed and got drunk. Parker was there to comfort her and even got her an apartment to escape the madness of those vying for her child. Janet continued being a control freak, Emily kept being manic and Paul played everything cool, even when confronted with Ralph's renewed threats. Jack tried to stay out of everything and just have a beer in peace. I'm a little bewildered about why Jack isn't more concerned by the fact that a known mobster keeps showing up at his house and messing around in his family's business.

Dusty finally came back from whatever black hole he'd vanished to. He and Ralph's business partners have had run-ins in the past. His interactions with Ralph were typical and I think we can all see where this is heading. Things with Teri were more surprising. Her sparring with Dusty contained a bit of a spark. Since his relationship with Bonnie is doomed, could this be his next pairing? She seems to have a thing for older men and her past is really vague so I wouldn't count it out. It's intriguing.

Jessica popped in this week. She flew to Oakdale to play over-protective mother. Bonnie and Dusty's relationship bit the dust. Since we knew that Chauntee Schuler was leaving, this shouldn't have come as any surprise, but I was disappointed that we didn't actually get more of their relationship in the first place. We didn't get to see her fall for him much. Even worse, we didn't get much of this loose, no-strings attached relationship they were supposed to have been having. That's something the show really doesn't have. Sex for everyone else is a lot more complicated, it could have been nice to see a little of the other side.

The Barbara and Henry debacle continued. After they went belly to belly on her floor, he was called away to see Vienna after she was nearly roasted in a fire set by Ralph, Barbara shed her desperation and got mercenary, even shutting the door on Henry's face when he was asking for money. For a moment she regained a little of the nastiness that's always kept her interesting, but that wasn't to last. She was soon reduced to looking needy and sex-starved again. But at least her mental state was made a little deeper than that as the week went on. Babs was in deep anxiety since she was waiting for the results of her latest round of cancer tests and Henry was a distraction. Henry just seemed pathetic in the entire thing. His mother nearly ran when the entire things with Ralph were falling apart but, suddenly, became sentimental and decided to stick around and help her son.

Poor Vienna walked in on Babs in her bed and flipped. Henry tried to be honest when confronted and it only made things worse. She dumped him, which was a wise choice. She really should have dumped him for good after the whole Geneva Swift thing. He's done some pretty nasty things, but he can't help it; it's hardwired into him. Katie was rather amoral about the entire situation. She and Brad discovered that they are having a boy. Something seems to have shifted seriously in his character over the past few weeks. He's become much more somber and serious. Are they trying to remake his character a little before he departs?

As for the Holden-Damian-Lily-Maeve-Meg pentagon, a few interesting things occurred. Meg actually seemed to smarten up a bit and played up a kind of sardonic diplomacy with Lily. She was less desperate and more deranged, which is something Meg wears much better. Damian kept making hopelessly romantic statements and Lily finally pulled his ring off her finger. Things keep falling flat between Holden and Lily but his chemistry with Maeve is steadily improving. Her makeover seemed to run a lot deeper than her outward appearance. For most of the time she's been around, she's been a fairly one-dimensional, even stereotypical, character, but since rescuing Holden, there have been hints that there is more to her character and she showed quite a bit of spine when dealing with Lily.

Anyway, those were my babbles about the week. Please feel free to leave your thoughts and opinions in the comments section below and remember that this is all in fun.

As The World Turns Video Clip: Every...