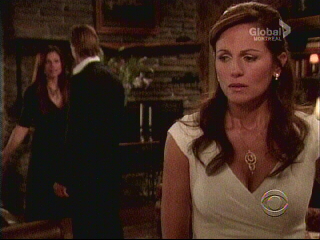 Thoughts on the week of October 5-9.

It was the week for big events as the captivity/wedding plot came to a head. After the root cellar wall collapsed on Holden, Maeve magically got him out and to a hospital without much explanation. She promptly vanished and he snuck back to town where he walked in on the end of Damian and Lily’s speedily thrown together wedding. We were told that Holden was gone for many months, which really doesn’t make much sense. After all, wouldn’t Liberty be a lot further along in her pregnancy and wouldn’t Holden’s hair have grown a little? It makes sense insofar as it gives the relationship between Damian and Lily a plausible time frame to develop in. Unfortunately, they didn’t actually do enough of that on-screen to make it look like it developed over months, and it seemed extraordinarily rushed and incongruous instead. This was also the case with the way the children came to ‘accept’ Damian. It wasn’t even like they were just doing it to be polite. To expedite things, they actually had Damian kill Ebb to save Faith in order to garner her automatic approval.

The biggest problem wasn’t just the clunkiness and plot holes, however. How it came to a peak was even more of a let down. Although the background music, and the thunder storm which accompanied Holden’s return, promised lots of melodrama. It all fell flat. Don’t get me wrong, Jon Hensley can give Holden some wonderfully understated and sensitive nuances and scenes, but this didn’t seem like the best time for it. I understand that Holden was exhausted and shocked, but his concern for Maeve registered a lot more deeply than his anger at Lily and Damian. The one thing his return actually managed to do was make Lily and Damian look a lot more interesting as a couple. They actually added another layer to their relationship this week and I can almost enjoy them now. Besides, anything that winds up messing with Meg and results in her getting a slap is worth something. As the week ended, Maeve finally made her first appearance in town and already seems to be morphing into a different character.

There were other problems this week. Luke told Noah that his father is alive in a kind of shrug. No one actually seemed that stunned. In fact, Luke's behavior all week was odd. I can accept him giving Damian his sympathy. He's his father after all and has saved his life, but Luke was leaping around emotionally like he was trying on hats and none of them fit. He blew up about Mason making a pass at Noah too, but that soon turned into a dead end. Even Mason seems bored and a bit disappointed to be part of their storyline and keeps trying to push it somewhere else.

Janet sprung her big idea on Liberty – she wants to raise the baby as her own with Jack. It was immediately evident to her daughter that this wouldn't work and no one would believe it. Also clear was the fact that this wasn't exactly about Janet trying to find an alternative to her daughter aborting the baby, but trying to corner her into being a mother by keeping the child in her life. So Janet has moved from using the mafia to using simple emotional blackmail to control her daughter's life.

Henry was finally pushed by Audrey to sleep with Barbara or face the wrath of Ralph. Barbara gave in very easily. It was depressing to watch her being portrayed as a desperate sex-starved woman in an unfunny bedroom farce. Even Audrey's manic energy couldn't salvage it. While Henry was rolling around on the floor with her and Katie was listening to them go at it through the door, Vienna was stuck at the diner while, apparently, Ralph had it burned down. At least Lisa popped up for a minute or two.

But the show's other awkward relationship fared a little better. Craig and Rosanna attempted to avoid each other after sleeping together. That lasted five minutes and then they were at each other's throats, in more ways than one. After putting on a show about how much they hated each other, they each went to see Carly in rehab to reiterate their supposed mutual loathing. She refused to see either of them and they wondered if she knew what was going on. That must have been the guilt influencing their thoughts, but they weren't feeling guilty enough to back out of bedding down again. It's a terrible thing to do, but I'm glad. Reformed Craig, and Rosanna for that matter, just isn't a good path for the character. Hopefully this will initiate the end of that for both of them.

Anyway, those were my thoughts about the week. Please feel free to leave your thoughts and opinions in the comments section below and remember that this is all in fun.