As The World Turns’ Vanessa Ray In Bored To Death 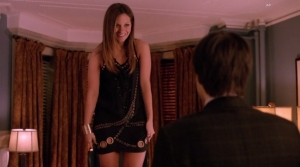 We’ve just started getting used to her as Janet’s little sister, Teri, on As The World Turns, but you can catch actress Vanessa Ray in a different role on Primetime this week. She is appearing in an episode of the new HBO series, “Bored to Death.” The series, starring Jason Schwartzman and Ted Danson, has been described as ‘a noir-rotic comedy’ It follows the adventures of a pulp fiction obsessed writer who, following a bad break-up, sporadically begins advertising his services as a private detective, in spite of having no experience.

Here’s a preview of the episode titled, “The Case of the Missing Screenplay.” You can catch it on HBO several times this week. Check your listings for details.

Soaps.com sends Vanessa our congrats on the gig!