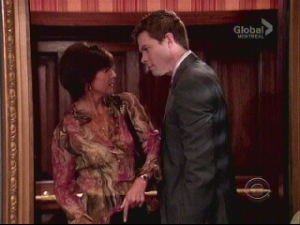 Thoughts on the week of September 28-October 2.

I enjoyed this week, but I’m not completely sure why. It felt coherent on a daily basis. Episodes were more or less broken down so that each concentrated on a specific story. This didn’t always make the most sense. Wouldn’t it have been more interesting if the story of Adam was set a little more closely with the story of Emily, after all, in a sense they are both about the anxiety and difficulty of having and giving up children? They’re both stories which could use more nuance after all. A more peculiar choice this week was leaving Holden’s story, which had picked up a lot of steam by the end last week, hanging until the end of this week. It seemed like a recipe for destroying its momentum. In a lot of ways it was. Friday felt tacked on. Maeve and Holden were locked in a root cellar where they easily found the cash which Ebb has been searching for. He was busy running off to town where he grabbed Faith and prepared for a showdown with Damian. Does this mean that Ebb is going to be vanishing soon? That guy is kind of growing on me, but he’s not going to last.

So far, it has been really great to have Maddie back. She’s already added a lot and really helped push the mess with the Hughes family along to something more interesting. Although she came back to town to testify for Adam, Casey talked her out of it, suggesting she could go to jail for speaking out and admitting to some less than legal activity of her own. She gave in to him. He abruptly changed his mind and told her to go ahead. She did. Adam was cleared and left town at his brother’s insistence. This led to Casey and Alison’s relationship collapsing. She was right to end things with him. Ali has her share of problems, but, in spite of his charms, Casey generally is a manipulative, spoiled jerk. His mother accused him of as much, but Tom stood up for him. Now that he’s finished with Ali, Maddie seems perched to pair up with him again. Far more interesting, however, was seeing her trade barbs with her mother. That’s what I really want to see more of.

Craig and Rosanna were the highlight of the week. Not just because Jon Lindstrom always has charisma to spare, but because the two characters were finally placed back a little closer to where I like to see them. They finally gave in and slept together, though they instantly went into denial about it. The event followed after they spent a tender day tending to Johnny after he'd had an accident on the playground. After they brought him home, they wound up in bed. I laughed hysterically when Johnny jumped in bed with them. Maybe I shouldn't have, but it was funny. With Carly coming back in a month, this should make for plenty of awkward energy and, I hope, the return of Craig and Rosanna's darker sides. Both of those actors excel at being charming and nasty, but they've been left doing the former for far too long.

There was some other sexual humor this week as Henry, Vienna and Barbara got trapped in a running gag about a sex toy. He accidentally left it in Barbara's room. When he went back to get it, she snatched it away. When he went back a second time, he took it back. Of course, you really shouldn't take a sex toy back and start using it. The more unfortunate thing about this story is how it is painting Barbara, who really isn't nearly desperate or dumb enough to fall for any of it to make much sense. In spite of that, she and Henry did enjoy some remarkable comic chemistry. But, like a lot of people, even if I enjoy Henry's antics, and those of his mother, I'm always left wondering what the point is since it rarely goes anywhere.

Everything with Paul and Emily and Liberty this week felt rushed. That was the point I assume. They were the surprise adoptive parents for the unborn child. I think everyone saw this coming and how it's played out so far hasn't been very surprising either. Liberty's parents said no and pressured her until she ran to Paul and Emily, who asked her to stay with them until the baby is born. She quickly started to have second thoughts about this since it began looking like she was exchanging one set of people meddling in her life for another. Janet became even more insufferable, Jack was even more easily bullied by her, but at least this means that she can start battling things out with Emily, which is sure to be fun. Although Paul and Emily are hardly ideal parents, is anyone involved in this story? Considering the fact that Janet has been reaching out to organized crime for support, moral and otherwise, she sort of loses the high road on the whole thing and comes off looking rather deranged. Here's a peek at one of next week's episodes.

As The World Turns Poll: What Will...