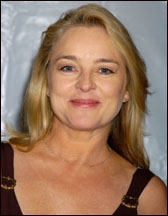 Soap diva Robin Mattson will join As the World Turns as a recurring character on February 12, 2007. She will be playing the role of Cheri, a madam who will be Emily’s rival. Robin is certainly no stranger to soap operas. In 2003, she played the role of Sugar on The Bold and the Beautiful. In addition to The Bold and the Beautiful, she’s also starred in All My Children (1994-2000), General Hospital (1980-1983) and Guiding Light (1976-1977). She’s known for making the characters she plays her own, and her acting career in daytime television has landed her six Soap Opera Digest Awards and four Emmy Award nominations. The characters she’s been known to play are villains, and her excellent acting makes them well-loved villains!

Whether you�re a fan whose chased Robin Mattson from soap opera to soap opera, or just a big fan, be sure to tune into As the World Turns on February 12 to see Robin in action again!

If you’d like to learn more about this superb actress, visit Soap.com’s profile page for Robin Mattson.

Rudy Giuliani Not Banned From Fox News, Just Not “Relevant”