David Kreizman Is Named Co-Headwriter Of As The World Turns 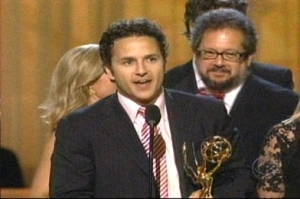 It has just been officially announced that Emmy Award-winning soap writer David Kreizman will be joining As The World Turns‘s current Headwriter Jean Passanante to form a new writing team for the series. The announcement was made by Christopher Goutman, the show’s Executive Producer. The change is going into effect immediately.

Kreizman is best known as part of cancelled fellow Proctor & Gamble soap Guiding Light‘s headwriting team. He began his career at that series as a production intern and learned the ins and outs of how to make a soap while taking on positions such as a Production Coordinator and Associate Producer. He joined the show’s writing team in 1997 and was made Head Writer at that soap back in 2004 at the historically youthful age of 29. Kreizman received a Daytime Emmy Award in 2007 and Writers’ Guild of America Award in 2005. He also received an Emmy nomination for his work on MTV’s “Spyder Games” in 2001.

“I am thrilled that Dave and Jean will make up the new headwriting team for As The World Turns,” Goutman said. “Both writers have an incredible respect for the show’s rich history and I am confident this partnership will generate the exciting, character-based stories for which As The World Turns is known.”

Jean Passanante joined As The World Turns as Co-Headwriter in 2001 before being named Headwriter in 2005. During her time at the helm, the show has garnered four Daytime Emmy Awards, two Writers Guild Awards and two GLAAD Media Awards. Prior to joining As The World Turns, she was Co-Headwriter of All My Children, but also had experience writing for “Another World” (1998-99) and One Life to Live (1992-98), for which she won an Emmy Award in 1994.

Soaps.com sends our congratulations to Kreizman on his new position and wish him success.

As The World Turns Video Clip: Is...

As The World Turns Poll: The Wedding...

David Beckham’s Kids: Everything To Know About His 4 Children With Victoria