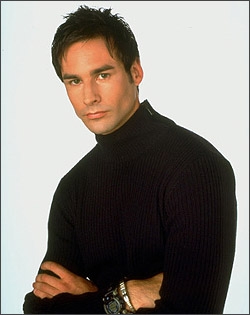 A storm was brewing in New York as Paul Leyden and his girlfriend (Melburnian Estelle Andrewarth) was enjoying dinner on the 65th floor at the Rockefeller Centre. Paul had special plans for that evening, and he wasn’t going to let the storm stop him. His plans included asking Melburnian Estelle Andrewarth to be his wife, and that’s just what he did! However, out of the blue, and moments after asking Melburnian for her hand in marriage, lightning struck the Empire State Building! All the Christmas lights on top of the building went out. Even though lightening knocked out the lights, it didn’t stop Melburnian from answering his question. Easing his mind, she said “yes!” It will be one Christmas they’ll never forget!

Paul reports that he and his (now) fianc�e will make their home in LA–where they met–but he said no wedding date has been set at this time. However, we will keep you abreast of any new information, if it becomes available.

Paul Leyden has played the role of Simon Frasier on As the World Turns since February 2000. In addition to As the World Turns, Paul has also appeared on LAX, Law & Order: Special Victims Unit, Tribe, Farscape, Ghost Whisperer and many others. He was offered roles on Lost and Grey’s Anatomy as well, but he turned the roles down due to conflicts with other shows, which he had already agreed to take part in.

Soaps.com sends their best wishes to Paul Leyden and his fianc�e. We wish you both much happiness as you prepare for your future together as husband and wife!