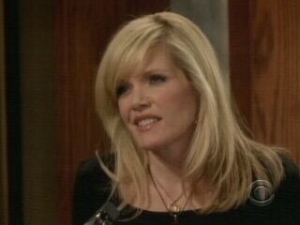 Somebody shoot me. We’ve got a murder mystery – of an unimportant character! We’ve got Parker buying a car with no adult supervision – argh! And we’ve got Dusty finally taking custody action – okay, I’ll buy that one.

Why couldn’t the big murder-mystery for May sweeps have involved a loved character? Or even a character who wasn’t so peripheral that the fans mostly forget his name? He’s the shadowy dock worker helping Lucy. Who cares that someone killed him! Now, if they killed Lucy that would be something (not that I want Lucy dead) or if he severely wounded Dusty, I could buy into it and be really invested. As it is, I don’t care that Cesar the dockworker is dead. I don’t wonder who killed him. I don’t care that Craig has been arrested for the crime because they have no motive, they’ve already violated his civil rights and don’t even know what his alibi is for the time of death. Come on! They would never question a suspect without knowing 1) time of death, 2) where Craig and Carly were at the time. Simply because a man was murdered at Craig’s docks that doesn’t mean that either he or Carly were involved!

I will admit that the gun being found in Craig’s vodka cases was slightly – but only slightly! – damning, but again, why do they suspect Craig of running guns? Sure he’s not a great guy, but running guns? And, again, they would try to check out his alibi for the time of death – which they still don’t have!

And don’t get me started on not allowing Craig to speak to his lawyer. Ugh!!

This is just silly. So we’re supposed to believe that Parker showed up at a local car lot with a wad of cash and they just let him buy a car?

I don't think so. Cash-and-carry or not, a minor can't just buy a car with no insurance, supervision…and the list goes on. And if the little whiner keeps telling Sage things like 'our mom can't be trusted', 'doesn't love us' and all of that other drek I'm going to wish for a summertime crash and hope Parker is not only paralyzed but that he longer has the ability to speak.

I get that he's ticked at his parents. I get that he doesn't trust them. That doesn't give him the right to scare poor Sage to death that her mother doesn't love her!

And Parker, I'm gonna say it again Little Man, stop pressuring Liberty to come back to you! She doesn't love you. Also, the pressure of putting another person in charge of your personal happiness? Not such a good thing.

Would someone tell Brad and Katie the truth already? These poor people just want a baby (well, at least Katie does) and they're getting nothing but torture. Vienna and Henry are willing to give up the kid so why haven't they told the truth? As desperate as Katie is for a kid we all know she'd jump at the chance to be Mommy!

The Other Baby Situation

Emily's hot and all but is there any young man she hasn't slept with or come on to in Oakdale at this point? Why is that this career-minded, capable woman can't find a man her own age? I'm all for the younger man, older woman relationship, but this is ridiculous! She's dating guys her son's age at this point. Ick!!

I'm glad Luke and Noah are safe. I'm glad Zac and Zoe are gone. I still wish Holden would step off the pulpit, though, where Damian is concerned!

As The World Turns Video Previews:...

As The World Turns Video Previews:...