I think so. Despite the past, I really think Henry would be a great dad but I really don't think he is ready to admit it. He's still too wrapped up in being the gambling, footloose and fancy free guy. He likes his 'single' status too much to admit, even to himself, that he might want something more. This growth arc is the perfect way to bring Henry more into the forefront, in my opinion. But in the process Brad and Katie's hearts are going to be broken. I'm actually on the fence about that. I would have liked the writer's to draw out their decision a little bit more – talk about adoption, embryo adoption, look at other surrogates instead of jumping in headfirst after a five minute talk. I can see the drama unfolding and wish it could be different for Brad and Katie, but at the same time it does make for an interesting storyline.

Although Carly stopped drinking this week, it's obvious that she has a problem. At least Craig is supporting her – for now! Who knows how long it will last! What I don't understand is what is driving her to drink. From the beginning it's just been an easy slide and with her history that doesn't make a lot of sense. She grew up with an alcoholic father so why would she suddenly start drinking to excess? I know there is the Parker situation. I know Jack makes her crazy. I know she's attracted to Evil Craig. Still, there has been no clear reasoning as to why this is happening now and not five years ago. Hmmm…

Wow! Are the writers turning Parker into an abuser or what? This storyline just keeps getting worse! Don't get me wrong, it's an interesting storyline, I'm just not in favor of turning any teenager into an abuser so quickly. No, he hasn't hit Liberty but he's emotionally blackmailing and abusing her at every turn. He did it in New York by accusing her of not loving him, he did it in Oakdale when he said if she loved him she wouldn't work at all. And then there was the, "You can see your mom without me anytime you want," line, implying that the only place she could go without him was to see her mother! Hello, Parker! This is another person, not your personal pet. Give Liberty some space! Yeesh!

I'm over Dusty. I love Grayson McCouch but the writers are writing Dusty with a savior complex and I'm not a fan. If Meg wants to ruin her life by going back to Paul, let her. If Lucy wants to wind up in jail for smuggling drugs, even medicinal drugs, let her. Why does Dusty have to save all of the women in his orbit? I guess it's a good thing Lily's off his radar – for now! I'd rather see Dusty in a fight with Craig than see him running from Meg to Lucy, trying to talk some sense into them.

Those are my thoughts, what are yours? Talk to Soaps.com about your favorite and least favorite storylines below! 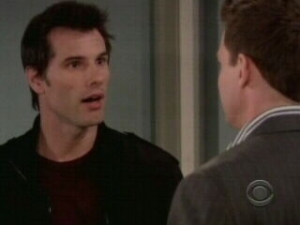 Happy Friday, fans! There has been a lot of talk about Luke on the boards this week, and it seems like the character has two camps: the Luke fan, who understands his idiosyncracies and the Luke hater, who is tired of the drama. Last week, I polled you on Luke and was surprised with the results.

Fan of Luke or not, there was a lot going on with the Snyder man this week – and not all of it was good. Despite Noah’s best intentions Luke continued to defend the Z twins and confront Damian. I think Luke is a little too tied up in the past to see things clearly at this point, and so do many of you. Last week 32% of you voted that Luke is overreacting to Damian this time around. Another 50% voted that Luke is just a self-absorbed brat. That poll proved to be right when Luke blamed Damian for Noah ‘leaving town’, when he ranted at Lily that she loved Damian more than him and the list goes on. Now, we know Noah has been kidnapped, but Luke doesn’t so I’ll give him a break there. What I won’t give him a break on is his conversation with Noah. Once again he tried to blame Noah for their issues with his ‘you’re running away’ attitude. It’s time Luke stopped looking for blame in other people and started looking at himself. For the past two weeks he’s been ignoring Noah’s advice, wants and needs in favor of ranting about Damian and jumping in league with the twins. If Noah really had left for some breathing room, I could totally understand why.

That said, I don’t want Noah to get hurt by these schemers! So I’d like Luke (or Damian or whomever) to come riding to the rescue really, really fast!