In the meantime, Charissa is keeping busy with a couple of other roles. She has parts in two upcoming movies "Hysterical Psycho", which premieres at The Tribeca Film Festival on April 24 and "The Marconi Bros".

"It kind of pokes fun at the horror genre and it was shot in black and white, so there are Hitchcockian elements," she said. "[Marconi Bros] is about two brothers who want to make it in the business of wedding videography. It is super-funny! I met the director on "Hysterical Psycho" and the movie was finished but they needed to do some re-shoots and I was able to do that. He let us rip and have fun with it!"

Ripping, or ad-libbing, is one thing that Charissa loves about doing movies because you can get a lot of emotional and reality in the takes that aren't there when simply saying lines over and over. But, she does still love the Daytime genre, too.

"I love both of them for different reasons. The technicality of both is really different and really fun. Soaps are so fast paced and it's just phenomenal. You have to do one show each day, where films can be shot for months and weeks," said Charissa. "What a lot of people don't realize is that in Primetime and movies you're seeing a lot of different takes that are then edited together. The beauty of soaps is that it is edited as you go; the scene that you see on the screen is one actual take. You have to be so prepared as an actor and ready to go. Part of working in Daytime is making those choices about your reactions and going with it all the way."

Right now Charissa is auditioning a lot and working with her theater company on a couple of projects. Will her role in Oakdale become a permanent one? It all depends on how the fans – and The Powers That Be – react to her appearance in a few days!

Charissa debuts on As The World Turns on April 22. 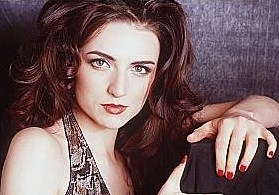 In just a few days a very interesting newcomer will appear in Oakdale – a woman with a few, let’s say ‘extras’ floating around!

Charissa Chamorro (ex-Tory Granger, Guiding Light and ex-Sophia Pellegrino, One Life To Live) plays the mysterious woman, brought around by Katie. Just a few days ago Soaps.com had the chance to chat with Charissa about the role – and the possibility she might be sticking around Oakdale for a while!

“Well, I can’t say too much, because I don’t want to spoil things! What I’ll say is that I was brought in by Katie to be a guest on Oakdale Now,” said Charissa.

Right now the role is a simple appearance part, but in soap operas you never know when that guest slot will turn into a contract role – just like Charissa’s roles on GL and OLTL! Would Charissa be open to a more permanent role on ATWT?

“Being on [the show] was such a great experience and I would definitely be open to that! I know Terri from her time on OLTL and it was great to work with her again and Chris Goutman [the director] was fantastic to work with. It was great working on the show and if the opportunity came about I’d be open to it.”

This Week's Video Clip Preview for As The World Turns!

As The World Turns Video Clip Preview: Liberty and Parker!