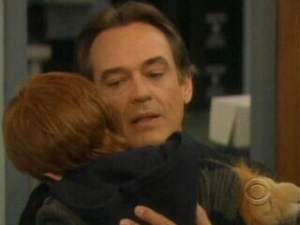 I love a good, interrupted wedding just as much as the next girl, but the best weddings-interruptus happen when the two people getting married really love one another. As Carly came to her senses at the bar, uh, altar, I wasn’t stunned or horrified for her. I was just hoping someone would toss some of that champagne my direction.

The Wedding That Wasn’t

Could someone smack Jack around? Just a little bit? And while you’re over there, grab Holden, too. The two Snyder men did their best to kill Carly’s plans this week – and, by golly, it worked! Now I’m not saying Carly should have married Craig, but I am saying her choice was no business of Jack’s or of Holden’s! Yeesh, these Snyder men are convinced they know the best for everyone in town and yet they keep making the same mistakes.

Jack’s had how many marriages now to get the Carly-addiction off his back?

Holden isn’t in love with Lily but tells Carly that only marriages based on love work out?

Carly and Lily need to have a meeting of the minds and dump both Snyder men like hot potatoes. And not take them back no matter how much groveling is involved!

The best part of the wedding? Margo swilling champagne like there was no tomorrow.

Just when we thought Jade might grow up and turn into a useful human being, she takes a job with Emily. Yep. Emily. And it isn’t a real job, Emily is basically prostituting Jade into breaking up Casey and Alison. It doesn’t matter that she told Jade she only had to ‘distract’ Casey and not sleep with him, she is paying Jade to get a guy. Yeah, that’s pimping in my book. Who knew the call-girl would turn into the madam with one simple Help Wanted ad?

Emily’s character is just strange these days, not that she was ever normal. I could see her being upset about Dusty. He basically jumped from her bed to Alison’s and then back again, not exactly an easy thing to get over. But to propose to Dusty after he not only slept with your sister but told you in no uncertain terms that he only tolerates you?

Yeah, not your best moment, hon. And the Casey connection is just weird. Emily's the one who broke things off. Emily's the one who wouldn't even consider have a real, honest relationship. And now she's blaming Alison by saying she is stealing her man? Get over yourself, Emily, and take some of those growing up pills we thought Jade was prescribed. Somebody needs to start using them!

As the week turned around Oakdale I had to wonder: why are the characters so encapsulated? Seriously, there is a huge opportunity that the writers are missing in their two paternity suit storylines: the Derek connection. Seriously, why aren't these two fab storylines crossing over one another? Derek doesn't think he deserves fatherhood. Craig thinks he is the World's Best Dad. Hmmmm. There is a huge opportunity to really get into the making of a family. Why didn't Dusty hire Derek to do a little leg-breaking – oh! I mean investigating – of Craig's missing year? As Derek investigated he would obviously start thinking about his role in Jade's life, bringing the whole issue of family and fatherhood full circle.

Make these characters think and not just react, that is what good writing is all about, right? Plus, that just makes so much more sense than Paul's rambling diatribe against Meg and Dusty. Did he really think Meg would fall into his arms after he submarined his dead sister's dying wish? Is Paul really that stupid?

"She's my wife," Paul kept repeating. Uh, yeah, and you just handed your nephew over to the wolf, himself!

At least Jade won't be Emily's next conquest.

Where is Henry? Did his book tour take him to Timbuktu? Why hasn't he been hawking the book all over Oakdale Now?

I wonder how long it will take before Barbara blows her top over the custody issue? And who will she be more mad at – Paul or Craig?

Best lines of the week?

Actually, there was only one (don't'cha just loooove Craig?):

Craig to Tom, "Now that I think about it maybe Adam would have been better off being raised by Hal."

As The World Turns' Trent Dawson...