As The World Turns’ Trent Dawson Chats with Soaps.com!! 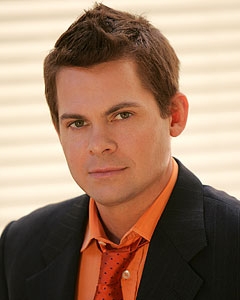 Trent Dawson’s As The World Turns character, Henry, is on many fans’ minds these days.

Henry has written a book, “The Man From Oakdale” (you can read the book review here) he’s been blamed for the downfall of Metro and freaked out (just a little) over Maddie’s return to Oakdale.

Okay, so Henry freaking out isn’t all that abnormal. But writing a book? Being the patsy for Carly? That was new so I had to catch up with the actor, to get his take on these events!

“Okay, first, I picked out the jacket cover,” said Trent. “That’s about the end of my influence on the book!”

Okay, so Trent didn’t write the book – we knew that, right? What does he really think about it?

“I like it! There is so much inside stuff for the fans,” he said. “You don’t have to be a fan of the show to ‘get’ it, but for fans there is a lot of inside stuff from characters to locations.”

And now fans can share in the glory of the book! Trent and co-star Ewa da Cruz (Vienna Hyatt) will be on hand at a book signing in Westbury, New York on January 31! The event will be held at Borders Book Store, 1260 Old Country Road at 4:00 PM. Don’t expect to see glimpses of Henry and Vienna, though, Trent and Ewa won’t be portraying their characters at the signing.

"[Going as Henry] would be just too weird! I'm just the guy that plays Henry, who wrote the book in fantasyland. To be there as Henry would just be creepy! I'm not going to put on the suit with the stripy shirts or introduce myself as Henry. I'm just Trent."

While I had Trent on the hook, I asked what we could expect to see from Henry over the next few weeks – and boy did he give us a scoop!

"Vienna's wanting a baby," Trent told Soaps.com. "For Henry this is disturbing because they have such a crazy, wild life! They dress up in costume, slug martinis and run a nightclub. This is threatening to him. Plus, he was the parent for his sisters – and that didn't go so well! He doesn't want that kind of responsibility."

Henry with a kid, hmmmm. I say bring on more for Henry – and more Trent! By the way, fans, Trent also talked about a different kind of addition to his alter-ego's family and chatted with us about his work with the on-going rebuilding in New Orleans. Soaps.com will have that part of the interview in just a few days so stay tuned!