As The World Turns Book Review: The Man From Oakdale! 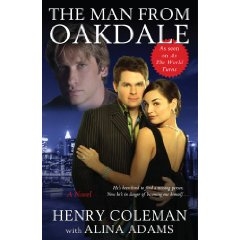 Unless you’ve been hiding under a rock, you know that As The World Turns has released a third novel! The first two – Oakdale Confidential and Oakdale Confidential: Secrets Revealed – were snapped up in a heartbeat and the latest installment in Oakdale fiction, “The Man From Oakdale”, is doing quite well, too!

Written by Henry Coleman and Alina Adams, this is the fictionalized tale of what might have happened had Lucinda Walsh hired (and then fired and rehired) Henry and Vienna to track down Johnny and Lucy.

Here is a blurb from the book cover: “Desperate to locate her missing granddaughter, high-powered businesswoman Lucinda Walsh hires Henry Coleman for the job. Sweeping from the sun-drenched South American Republic of Montega to a nobleman’s dangerous lair in Sweden, and infiltrating the United Nations in Manhattan, Henry and Vienna discover that the tentacles of Lucy Montgomery’s life on the run reach far and wide. With assistance from Margo and Tom Hughes, Sierra Esteban, and Gwen and Will Munson, and challenged by the escalating tensions in their own romantic relationship, they confront enemies both seen and unseen who are locked in a power struggle with Lucy and Johnny at its center. But when Vienna herself disappears, Henry must race against the clock to complete his mission so they can both make it back to Oakdale alive.”

You can purchase the book at your favorite local bookstore!

I just received my copy of the book and thought it was high time for a book review right here on Soaps.com!

First, I have to say that you should read the book with one thing in mind: it's the fictional take of a fictional character. In other words, it's fiction and it's meant to entertain all of us; not to take the place of what is happening (or will happen) on our television screens or what could happen in real life. With that, on with the review!

I really enjoyed this book. I love the character of Henry and from the first line, this was a Henry kind of book. Sassy and sarcastic, Henry takes on the job of finding Lucy and Johnny and of course madness ensues from there. Henry and girlfriend Vienna (did you really think she would sit this one out in favor of dishing peppercocker at Al's?) head for Montega, are swept away to Sweden and then manage to sneak into the Manhattan offices of the United Nations!

Some of the plot points were a little too simple (I won't spoil the book for those of you who haven't read it). Suffice it to say that if you get frustrated with Margo's detective skills on the show, there will be a few frustrated moments as you read the book. Still, it's fast read and really, really engrossing. My copy of the book arrived on a Monday, during a really busy week, and I had finished the read by Thursday evening. Seriously, a fast read.

If you're looking for a little bit of an escape, a few huge doses of Henry-ness, a little silliness and a few sexy moments between Henry and Vienna, you don't want to miss this book!