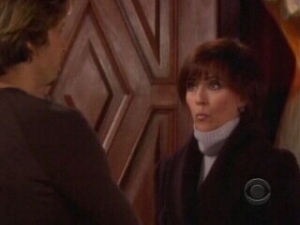 Three proposals, one grown-up baby daddy revealed and a little insanity from Emily. What more could we ask for in a single week?

Nope, not the Johnny situation just yet. I’m talking about the other custody issue – Jade’s paternity. Was it my imagination or is Derek hell-bent on destroying any chance of a relationship with Jade? And could someone toss a little water on Jade to stop her I’m Tough act? Seriously, between the two of them I wanted to scream at the top of my lungs this week. Okay, Derek’s a bad dude with a shady past. Deal with it and move on, already, don’t whine about for days on ened! Okay, so Jade’s always been a little troublemaker. We get it. That’s part of the love we have for her. But she’s acting like a three year old who didn’t get any dessert! They both need to get a big clue and start by getting to know one another.

Did someone spike Emily’s coffee this week? Man, she was on a roll! First, she convinces Dusty that he, too, needs to be married to win custody (at what point did Oakdale go back in time to the 1970s?) and then she suggests she be the good wife? With her past? And she’s outraged when Dusty brings that up? Newsflash: a past in prostitution isn’t looked kindly upon, Em, and you know Craig will use it to his advantage. Sure, Dusty could have handled it a little better but he did try to let her down gently before she demanded to know what was going on.

And then she accuses Alison of stealing all of her men? In which lifetime? Yes, Alison had a one-night-stand with Dusty. He tried to make things right and you left town, Em. You came back with Chris on your arm and wouldn’t even look at him. And now, after you break Casey’s heart you’re going to accuse Alison of stealing him from you, too? Alison can’t steal what you’ve already destroyed!

I say get rid of Dusty and Craig, both of whom are acting like 10 year old boys, and give custody of Johnny to Barbara. Oral cancer or not, she's the most stable influence the kid could have at this point. The last thing we want is for Johnny to grow up into Mini-Craig or a Mini-Stenbeck (yeah, I'm seeing flashes of the Stenbeck clan in Dusty now!); the kid deserves better than that. And don't get me started on the Meg vs. Carly for Mother of the Year fight. At this point the kid is going to turn into a cross between the Holier Than Thou Snyders and Eviler Than Anyone Montgomery's – which means an evil villain who believes everything he does is good.

I'm not certain that Paul really is cured of his insanity – can that ever be cured? But if Emma doesn't back off he is certain to relapse. The woman just can't leave well enough alone. She needs something else to focus on – maybe Craig should propose to her next!

I love Paul. Really I do. I love him sane. I love him crazy. I'm one of the few that love him with Meg but at this point I don't think he deserves Meg; maybe I should rephrase: Meg doesn't deserve him! I'd like to see the writers explore the connection between Paul and Josie or maybe even introduce a new woman to steal his heart and get him the heck out of Fairwinds. Because, correct me if I'm wrong, but Paul's real craziness began when he moved in there, right? So maybe Rosanna's haunting her old home and making him nuts.

Last week I polled you on the Craig/Carly marriage idea. Surprising most of you are in favor of the match, specifically because it will make Jack nuts (yeah, we soap fans are evil aren't we?). I'm still in favor of the union, but I don't want Carly to marry Craig to make Jack jealous; I want her to do this for her own benefit, without thinking of how Jack may or may not react. Jack needs to be the last thought she has while she's weighing her options!

The best lines of the week?

Carly to Lily, "It's nice to have a man around again."
Lily replies, "If Craig is the man, I'd rather be alone."

Dusty to Emily, "The past is past. It's fact!"
"And you will never let me forget it," Emily replies.

As The World Turns' Alex Charak In...

As The World Turns Book Review: The...