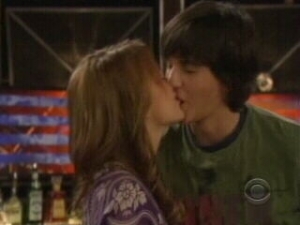 Why? Finally! Why? Life in Oakdale is certainly never boring but, for me, there were a few too many ‘why’ moments. Why did Craig propose? Why is Liberty so indecisive? Why Josie, period? And there are a few more. There were also a lot of ‘finally’ moments. Finally Luke and Noah had sex (can we stop talking about it now?). Finally Derek acted like a grown-up. Finally Carly and Lily are acting like real friends. Not bad, for a week’s worth of work, I’d say!

I could sub-headline this section with “…And The Custody Fight”, but I’m actually going to try to keep them separated. We’ll see how that goes. Okay, the proposal. Forget everything that happened prior to Lily sitting down with Craig for one teeny minute. My question? Why did Lily sit down with him in the first place? She doesn’t like the man because he’s the arch-enemy of her high-school sweetie. She hates Craig, like most of Oakdale, but after a confrontation with said past-sweetie she’s going to give him advice on how to beat Dusty? At what point did Lily tuck away her brain in favor of a martini?

I don’t get it. Really and truly, I just don’t get it. Don’t get me wrong, I like the twist and I actually think Carly should consider it, but I still don’t get it. Craig is manipulative but he’s manipulative behind the scenes – like bribing Katie or a judge – not in getting married to present a fatherly situation. Why should Carly consider it? Because it’ll make Jack nuts. Seriously, torturing a fictional hero who thinks he is better than all other people in town is fun. Now, if Craig could somehow move the whole town to Utah, get Lily to marry him, too, and drive Holden over the edge my life would be complete!

What’s Up With Alison?

Does Jack really think kids don’t date or fool around? What is his deal? Yeah, I’d be upset to walk in on my kid making out with a boyfriend/girlfriend but flying off the handle and demanding that they never see one another again is just too weird. It’s the part of Jack that I absolutely hate. He acts as if Parker and Liberty are plotting to start a teenage pregnancy ring or something even more ludicrous. And, really, he has no room to talk. How many times has Liberty walked in on him making out with Janet in the flippin’ kitchen? Yeesh! Pot, meet kettle!

Do I like the romance between Parker and Liberty? Not really, mostly because I feel that Liberty is using him. When she feels like having a boyfriend, she's all over him and when she feels like being a single girl, she tells him to back off and blames her feelings on his possessiveness. Uh, he wouldn't be possessive if you'd stop sending the mixed signals, chica!

Luke and Noah Had Sex!

It's about time. And, this was one storyline that happened a little too late for me. Have I confused you yet? Let me explain: eighteen months of 'dating' – barely kissing and holding hands? That is so unrealistic in today's world. So, it was anticlimactic. Will it lead to a better Luke/Noah storyline? I hope so. Does it spell the end of this supercouple? Usually blissful, which Luke and Noah are right now, only lasts a few months in soapland, so yeah, I see the end of the romance coming up fast. Don't get me wrong, I'm glad the scene is out there and over with so the should they/shouldn't they disagreements can die down, but it's just a little too late for me. The only thing that can save the couple, for me, is a rewrite of their characters so that Luke stops whining about anything and everything and Noah actually starts to share his feelings (Luke called that one!). Seriously, I want to root for this couple but so far the writers aren't letting me. Most of you agree with me. I polled you about the consummation of their relationship and 80% of you said you hoped this meant a better storyline in the future. So, all is not lost, right?

So Robby came back and Derek was shot, leading him to want to know if Jade is his daughter. Good. Let's get the paternity test on the road and move these characters out! Sorry, but I have trouble rooting for troublemaker, insincere and insecure Jade. And forget about Derek. He let James blackmail him – we still don't know why – and now he wants everyone to forget about that? Sorry, can't do it. Give me a little more background first, and we'll see.

I'm so glad that Brian finally admitted he was gay; I'm so glad that Lucinda was kind to him and helped him move on. Seriously, those scenes could not have been better written or better acted. I'm going to miss Laurence Lau's Brian, but I hope all of this leads to a better storyline for Elizabeth Hubbard's Lucinda – because she is a terrific actress!

The best lines of the week?

Luke to Noah, "Oh, come on, you're selfish with your feelings!"

Parker to Carly after she backs up his decision to date Liberty, "Who are you and what did you do with my mom?"

Dusty to Craig, "If you go anywhere near my son, I'll kill you!"

Lily to Craig, "It would help a lot if you'd get married."
Craig to Lily, "Will you divorce Holden and marry me, then?"
Lily to Craig, laughing, "Not on your life."

New As The World Turns Poll and...