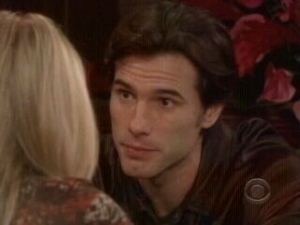 As The Week Turned
January 5 – January 9

Here and gone. I was blindsided this week by how fast the returns of Maddie and Lucy were over – and how the return of Jade just keeps dragging on. Nothing bugs me more than returns that don’t make sense. Recasts? I understand the need for them; some are hard to get used to, but that isn’t as big a deal to me as nonsense returns.

The Return of Jade, Maddie & Lucy

Have there been three more useless comebacks to Oakdale in the past year? The return of James and Dusty has strong storylines accompanying them. But Maddie coming back to Oakdale for sex? Come on, she’s a college student – they all have sex all the time! Lucy’s return sort of impacted the Dusty/Craig storyline, but it would have been so much better if the writers had kept Lucy around for more than two weeks! Come on! She runs at the first sign of trouble? Let’s take a look at the past: first and foremost that Craig doesn’t have custody of Johnny so he can’t press kidnapping charges. Dusty won’t press charges because he knows why Lucy ran off. So why does she have to run yet again? I just don’t understand. And then there is Jade. Poor little Jade coming back because she needs money? Okay, that is typical Jade. But couldn’t the writers have returned with a more mature Jade? A Jade who has a brain or a Jade who isn’t simply a troublemaker?

The only good thing that has come of Jade’s return so far is that Lucinda knows about Brian. I don’t doubt that he loves her on a platonic basis but Lucinda deserves so much more than that! She deserves pie-in-the-sky, heart-stopping, head-over-heels love. And I hope she finds it – soon!

Who didn’t see this coming? Seriously! Carly rarely goes to work – not that any soap opera characters seem to work! – and Henry keeps blowing off his shifts. The only person regularly there is Bonnie and all she does is feed Derek free sandwiches. It’s no wonder the place is going under! A club like Metro should be hopping all afternoon, every evening and into the night no matter what is going on with the economy. Carly should sink some money into a good advertising campaign and get people back in the door!

That said, I like that Craig is bailing her out. Why? Because I like Carly and Craig together. Always have. He's a schemer, she's a schemer. He's sarcastic, she fights right back. He doesn't use her past against her and Carly doesn't let Craig forget about his past. Together, they really work.

You guys know I like Janet and Jack, at least for now. But Jack is seriously bugging the heck out of me. He needed a loan to pay for their wedding extravaganza, didn't get it and now he thinks he can get a loan for a house? What planet is he living on? And why do they need a house? Of the sixteen people living at the farm when they moved in, only Emma, Meg and Eliza are left. Plenty of breathing room now that Holden (and family), Jack's kids, Luke and Noah, Aaron and Alison ... yeah, I think that is everyone! … have all moved out! All three of them – Jack, Janet and Carly – are living in la-la land if they think a bank is going give them second mortgages to 1) save a club or 2) buy another house. Not gonna happen.

Why not live in an apartment? Why not ask money-bags Brad for a loan? Or Holden for that matter? He was going to give them the moolah for the wedding, why wouldn't he give them the cash for a house?

I am really glad we finally have Johnny back in Oakdale. The search is over and now the real fighting can begin. You know Craig and Dusty aren't going to honor their promises to Lucy. You know they are going to go for the jugular. And you know it's going to be fun to watch. Of two of them, I really don't know who I want to raise Johnny. My instinct is for Dusty, but my heart goes out to Craig…I'll just wait on that decision!

What I don't like is Katie. In what realm is she living that she suddenly feels badly for her manipulating, blackmailing brother? Craig nearly had Brad imprisoned for life less than a month ago and now Katie feels that she has to make things right for her brother? What?!? And she's mad at Brad for telling Dusty about the blackmail – something Dusty knew, without knowing the details, in the first place? Yeesh! She is a glutton for punishment!

Call me crazy but I'm really looking forward to seeing more of Crazy Paul. I don't want him to be crazy forever, but there are a wealth of problems that he has suppressed for years that need to be worked through – and that is just the kind of drama we like, right?

My favorite lines of the week:

Brad to Craig, "You're not as dumb as you look, either!"

Lucinda to Brian, "You wanted to bed my grandson!"

But Margo wins by saying to Katie, "You've got to stop giving away body parts!"

Hey, she's given away a piece of her liver, bone marrow…and after running to Craig she is apparently ready to give away her brain, too!