Soaps.com Chats with As The World Turns Austin Peck! 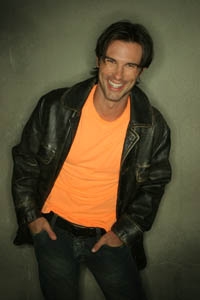 Austin Peck may play silly, unthinking Brad Snyder on As The World Turns but in real life he is quite thoughtful! I had the chance to chat with Austin a few weeks ago about the upcoming Soap Cruise. You can read that article here.

As we chatted, Austin talked about a few of his favorite things and since we’re now wrapping up the holiday season, I thought it was high time for sharing!

Soaps.com: “Which do you prefer – The Beatles or The Rolling Stones?”

Austin: “The Stones, especially from the 70’s!”

Austin: “I have to go with Stephen King but I do like Nicholas Sparks! I used to read [Stephen King] in High School during those boring classes!”

Austin: "Oh, see that depends on where the beach is - because there are some skuzzy beaches! But, if we're talking Miami Beach in the height of the modeling season, definitely a beach!"

Soaps.com: "Tim Allen as Santa or Henry Travers as Clarence?"
Austin: "Clarence. Any time you bring up "It's A Wonderful Life", Frank Capra is one of my favorite directors and that is one of those films you can watch every year and still get something out of."

Austin: "American cartoons because anime makes no sense whatsoever! The art, though, in anime is really good!"

While we were on the subject of art, I asked Austin about the caricatures that he draws. He says art is both a passion and a hobby for him.

"One thing I love, when I go to an art gallery is I go right up to the painting to look at the strokes and then step back and really look at it. Art is one of those things that is instinctual. I see that in art and even in comic books."

Now, isn't that an interesting take on things? I hope you've enjoyed this look into a few of Austin Peck's favorite things – I certainly enjoyed talking to him about them!