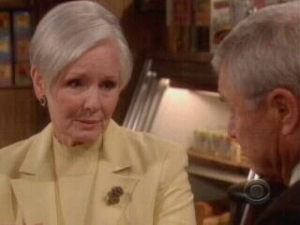 Brian and Lucinda are fun! (Soaps.com)

You know what I love about soaps? When the writers take real-life possible situations and put them realistically in the paths of our favorite characters. That happened to Katie, Alison and Casey this week and (for me anyway) that made Oakdale the place to be.

There is a lot more to Casey and Alison than just two friend sticking up for one another, let me say that first. One of the best lines of the week was when Casey made the crack that he was the first Hughes man not to be taken with a Stewart woman (too funny!). You guys know what that means…a new romance is probably on the way. And, even though it might look like Allie is getting Emily’s sloppy seconds, I really don’t think so.

How many times over the past few weeks have we all mentioned that Emily was using Casey and it had to come to an end? I think that end is finally here (yay!), even though I was a Casey/Emily fans. I liked them together because I knew it couldn’t last. Tom and Margo, Chris, Dusty…there were too many obstacles out there, not to mention the colossal age difference. May/December relationships are great, but this one was never meant to be.

So, having Casey and Alison build on their friendship makes perfect sense to me, and if it leads to a little romance down the road I’m all for that, too. How about you?

Okay, I have to take a minute to breathe because (gasp!) Chris is gone. At least for now. This week marked the last days for Chris Hughes, who trotted off to Africa to heal the sick.

I didn’t always like Chris’ actions but I always did like watching him. He made Oakdale a little bit more interesting and a lot more hot!

This quadrangle has disaster written all over it. Not because Dusty, as Emily pointed out to Paul this week, always falls for his damsels in distress. Not because Paul is really losing his mind. Not because Meg is (in all liklihood) going to have yet another miscarriage. Not because Emily is over the moon for Dusty and willing to do anything to get him back.

Well, okay Reason #2 and Reason #4 have merit. This quadrangle has disaster written all over it because no one is talking to anyone else. Paul is telling Meg one thing, Dusty another and Emily another. Same with Dusty, Meg and Emily. Dusty probably really is going to fall for Meg, Emily is probably going to get left out in the cold and Paul is probably going to have to be committed. Which makes for great Daytime television. Disastrous Daytime television. And I can't wait for more disaster for these four characters!

For the first time in a long time, I wanted to hug Brad this week. Okay, he isn't taking Katie's reaction to Spencer seriously enough and okay he's jumping to Spencer's rescue a little too much. But he is also caring for Katie. I loved it this week when he compared their marriage to a recipe and said Spencer's 2% couldn't replace Katie's buttermilk.

"So I'm your buttermilk?" Katie asked and Brad kissed her. I know. Corny, corny, corny. But it was so sweet and completely Brad-like. I loved it.

I also thought it was hilarious when Katie inadvertently sicced Henry and Vienna on Spencer. Talk about getting the heebie-jeebies by going home! If I found two near-strangers in my bed, I'd have to buy a new mattress.

Spencer, though, is pushing a little too hard and if Brad doesn't see right through her in the next few days, I'll have to give him a head-slap.

You know what I really, really want? At some point in the next couple of weeks I want Jack and/or Janet to make a reference to the fact that they feel like they're starring in an episode of "Three's Company". Not because the situation is funny but because every time someone says, "Jack and Janet" in the same sentence, I expect to see Chrissi Snow come around the corner! The sit-come was a stand-by in the early 80's and (even though it was on a different network) I think it would be smart to add that in to the mix.

Other than that, I'm just getting ready to hold Janet's hand because it is blatantly obvious that Jack and Carly are still in love and simply not admitting it. I polled you guys on Janet last week and 74% of you said Janet should move on and find a new man. I say she should go after Brian and give Lucinda a little competition. Could you imagine the Janet/Lucinda zingers? Yep, that would be great television!

Dusty had two of the best lines of the week, at least in my opinion. When Paul apologized and said he wasn't crazy, Dusty replied, "You're in the Psych Ward Frequent Flier Program." Priceless!

And then, he had to zing Margo by saying, "Lawyers are for wimps." Oh, I love an Alpha male!

How did Oakdale rate for you this week, fans? Talk to Soaps.com about it below!

As the World Turns Casts Kristen...

As The World Turns' Austin Peck...