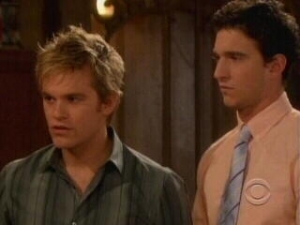 Hey there, Oakdaleites! We’re trying out a different format this week, mostly because there are some things that are really beginning to bug me and I have to get them off my chest. So, this week it will be the bad before the good. And, as always, let me know what you think by dropping a note in the comments section! I love to talk Oakdale, so let’s get to it!

First and foremost, Nuke is getting on my last nerve. Particularly the Luke part of Nuke! I realize that he had a really tough time admitting he was gay but that doesn’t give him an excuse to be rude to people about his sexuality. Now, we all know that there is something not right about Brian. But, seriously, there are people in this world who have issues with homosexuality. There are people in this world who will discriminate. I still don’t think that what Brian said, which was the equivalent of “when we’re around certain people, it might be better for the foundation to let me lead”, was all that bad. Obviously there was subtext. Obviously Brian has some ulterior motives. I really feel that Luke blew what he said out of proportion. I’m not saying Brian was correct in what he said, but the way Luke reacted was a little too over the top for me.

And on that same subject, I’m really getting tired of the boys doing nothing and going nowhere. There are a lot of people to please but the writers really need to decide something: are they going to tell this story or not? Because a lot of people are frustrated with the slowness of it all. A few weeks ago – and after only knowing one another for a couple of months – Liberty and Parker did the deed. But, because they want to tell the Nuke story in “real time”, Nuke still are at the hand-holding and kissing stages. I don’t get it. They’ve known one another for over a year. Luke has been attracted to Noah for nearly that entire time.

This is completely unreal to me. People don’t wait long periods of time before jumping in the sack any longer, gay or not. Whether Noah was completely confident in his sexuality or not, they would have slept together by now. Especially because Noah’s father was so against it, I’d think he would have wanted to go all the way to prove to himself that 1) he was gay and 2) no one was going to tell him what is right or wrong. Where is the realism in two young men holding hands after a year of dating? Where? Where? Where?

Second, Brad. BradBradBradBradBrad. What the heck is he thinking? I'm going to repeat a few things I said last week, but at what point did Brad completely lose his mind and replace it with Jell-O? I realize that Libs said Parker's name. I realize that she was unconscious and her dress was torn. That all looks bad, but why did he immediately run for Parker's house? Why didn't he want to go to the hospital? A normal father, even an abnormal father, would want to be by his daughter's side in that situation, not running all over town acting crazy. He didn't even bother to call Janet! Come on! That is just ridiculous!

And the last thing that is bugging me is Holden. I'm still waiting for the Holden we all know and love to come back from whatever mental institution he's been residing in. This Holden we've been seeing for the past year and a half is not the Holden we all know and love. Holden is a little self-righteous but he isn't the over the top, bludgeon anyone who doesn't agree with you type. The Holden we know is understanding. He listens. Sure, he jumps to conclusions and sometimes overreacts but that Holden wouldn't have driven Lily into Dusty's arms, wouldn't have gone after Carly and certainly wouldn't be flip-flopping day by day according to what either of the women is doing. Our Holden just isn't that guy!

Okay, now that that is off my chest, we'll talk about the stuff I'm really liking about the show. Primarily, Janet!

I knew Julie Pinson (Janet) would be a great addition to the cast but I have to admit that in the beginning I really didn't care for the character. She was too caught up in the past and in reliving her high school years. Come on! What 30-something does that? Now, though, the writers are really bringing Janet into her own and I'm loving it! She's got a smart mouth, she says what she feels and means what she says and, let's face it, she is the only adult in the whole Liberty/Parker mess who is acting like she has a grain of common sense.

Let's face it, if you tell a teenager not to have sex, what are the odds they'll listen? I'd say slim to none. Things happen when you're a teenager. Hormones start moving and badda bing, badda boom, you're having sex in a parent's basement. By making sure Liberty was protected, she acted in a responsible manner. Kudos, Janet! And don't let Jack start beating you down now!

There were two highlights to my week: James and Vienna. It's about time some life and silliness - even evil silliness! - came back to town.

Who else was chortling when Vienna walked in and took Henry to task for drinking before lunch? Who else thought the cat-fight with Bonnie was exactly what needed to happen? Who else thinks that things aren't going to be smooth sailing but are certainly going to be fun to watch where Henry and Vienna are concerned? I have a feeling that between Al's and Metro, we're going to be seeing a lot of the drinking holes in town over the next few weeks!

And finally, James. Who doesn't love a great villain? When he showed up on Paul's computer at the end of last week, I thought it wasn't going to work but now that he's taken up residence in the wine cellar (who does that?) with Meg only a floor away, I'm really beginning to enjoy things. My favorite line of the week came from James. Well, from Paul getting on to James.

Paul said time and again that James had to go. Finally, he'd reached the end of his rope. "I want you gone," said Paul.

"And I want a sandwich," James replied.

You just have to love a villain who always has the most frustrating answer possible!

That was it, fans, a lot going on in Oakdale but this is my take: things are definitely going places. Even the storylines that have me frustrated are keeping me guessing. And, I suppose, we can't all be happy all the time, right? I'll keep watching and I'll keep reporting back to you. Why don't you guys tell me what you think? Maybe between us all, we can get to the bottom of the problems plaguing Oakdale!