When Hogan Sheffer took the helm as head writer at As the World Turns in 2000, he was a breath of fresh air. He brought on a much needed transformation. Sheffer shook things up, sending As the World Turns ratings skyrocketing and helping to send the show to the Emmys for the first time in 14 years. Hogan Sheffer won Emmys for best head writer in 2001, 2002, 2004, and 2005.

Now, with head writer James E. Reilly”s contract renewal at Days of Our Lives being contingent on budget cuts and is said to contain a ratings guarantee clause, and with ratings at an all-time low, seems NBC is choosing to replace Reilly.

Enter Hogan Sheffer. Sheffer left As the World Turns under not the best of circumstances. He took a 17-week sabbatical in February 2005 before being relieved of his duties two months later after reporting to the media–who loved the writer and his sense of humor–that he and ATWT executive producer Christopher Goutman had gotten into a verbal altercation.

There were also ATWT fans who criticized Sheffer, saying he favored new actors, featuring them on the show and neglecting the veterans.

A Days of our Lives spokesperson has been quoted as saying “Hogan will be starting in August.”

Guess we”ll find out soon whether Hogan Sheffer still has that magic touch.

It's a girl, for As the World Turns Martha Byrne and husband Michael McMahon!

As the World Turns Beloved Actor Benjamin Hendrickson, Dies At 55 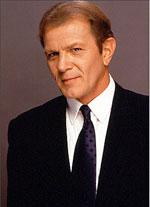