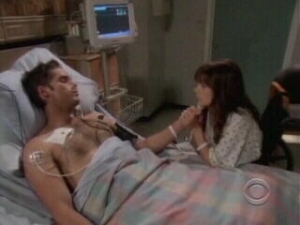 Finally! Lily has moved on! (Soaps.com)

Another day, another dollar. But after the rip-roaring week we had, I think we all deserve a raise, don’t you? (Boy, I hope my boss doesn’t read that!) Seriously, who didn’t love the developments from Monday through Wednesday? I didn’t see Aaron’s reaction to the gunshot coming at all, I’m still not convinced that Rick was alone in the poisoning scheme and Lily finally seems to have made a break from Holden. All in all, I say it was a week well done. Now let’s get to the play by play!

First things first, we’ve been talking about the poisoning storylines and the craziness that ensued. And more than one fan has emailed us about the countdown running on the main page. Well, fans, you guessed right – it was all related to the poisonings and more specifically to how the mysterious gifts were going to affect one particular triangle: Alison/Aaron/Chris.

I think it is interesting that it took a gunshot wound to actually get Aaron to admit his true feelings for Alison. Feelings that most of us fans have seen coming for the last few months. Say what you will about Snyder men wanting to save the world – or at least the women in their world! – but who didn’t think Sofie was a poor replacement for Alison in Aaron’s savior complex? When she pushed him out of her life, I knew a reconciliation would come about for Double-A fans. My question now is, is it the right time? I love Aaron and Alison together, don’t get me wrong, but Alison’s chemistry with Chris is white-hot, sexual harassment charges or not! Plus, Chris proved this week that he really does have a good heart, he just sometimes hides it when he feels hurt.

I’m still not convinced he is the right guy for Alison. Part of me thinks she needs that I’ll-Fix-Everything kind of guy in her life because of all her screw-ups. On the other hand, at some point Alison is going to have to learn to stand on her own two feet instead of leaning on someone else to solve her problems. What better time than now? She’s returning to nursing school – a huge challenge! -, she has a developing relationship with both Aaron and Chris, she has her mother undermining her confidence unintentionally and in the next few weeks Dusty is going to return from the dead. I’d say all of those things equal several months of emotional highs and lows for Alison. I, for one, am looking forward to it!

Now that my love-fest with Double-A and Chris is over, I have to say one part of the poisoning mystery still has me thinking that Rick didn’t do it. The poison at the Snyder farm. At what point in his incarceration did Rick have time to get to the Snyder farm? At what point did his round-the-clock guards forget about him long enough for him to buy gifts, poison them and mail them? At what point did he convince the warden of the prison not to search the packages he was sending? And how did they have all of those different postmarks when he was only able to mail them from prison? All those questions have me scratching my head – and believing that we haven’t seen the last of this poison storyline and realizing that Rick couldn’t have done it. At least not alone!

You know, I know Paul was a bad guy. I know he isn’t trustworthy and I know that Meg sometimes jumps in over her head without thinking about the repercussions. Still, do Emma and Holden have to act as if the world is ending every time Paul comes around with Meg? Sure he was a bad guy but in the past year and a half he’s done nothing bad to Meg. Nothing. In fact, he has done a lot for Meg! But that isn’t good enough for the Snyder’s. Nooooo. As a Peg fan, I’m disappointed in their reactions. However, I think Meg has the right idea: ignore the family and just be happy because they (especially Holden) have no room to throw stones at her relationships!

Speaking of Holden, would someone make up his mind already? He’s waffling between Carly and Lily because he knows he can. Both women are desperate for someone to love them and stand by them. He in only making things worse for both women. I say they should both kick him to the curb and mean it! Don’t take it back. Don’t let him weasel his way back in once he realizes that one or the other of the women has decided they don’t want him. Holden needs some alone time. He’s been Married Guy for so long that he doesn’t know how to act without a woman to lead around. In some ways, he is just as bad as Carly and Lily but in some ways he is much worse. At least the women realize their weaknesses. He doesn’t realize anything!

Jack and Janet. Can any of you deny the steam and floats off the screen every time they are together? I love CarJack but Jacket is better! Janet is a strong woman (like Carly), she makes mistakes (like Carly) but she also admits to her mistakes and tries to atone for them. Carly gets mired in her bad feelings because of the mistakes she makes and then makes things worse.

What I'd love to see? A long term relationship between Jack and Janet, a wedding that will actually last and a relationship that is healthy! Also, it would effectively end the Parker/Liberty madness. Those kids are great but Parker is about to lose his mind. I've said it before and I'll say it again, the kid needs therapy! Carly, see about that ASAP!

I love Henry (just like a lot of you guys) but I hate his storyline. At what point did my fun loving Henry become a pseudo-pimp? He's making Bonnie take lawyer jobs because they pay well and will fund his club! I realize she is selling her actual skills but still, he's pressuring her into it! That is just wrong. And if Vienna were here she wouldn't stand for it. Where is our Vienna, anyway? Her tiffs with Bonnie made the character hilarious - and the looks on Henry's face? Amazing! Giving Henry screen time was a great idea; making him into a hard, money-focused business man was a mistake!

After another week spent under the As The World Turns microscope, that is how I see the problems of Oakdale. Here's a question: why isn't Kim doing tie-ins with the Olympic coverage? I realize The Powers That Be couldn't use actual Olympic coverage but with every network in the world broadcasting live, it would have added another level of reality to WOAK's Oakdale Now to have Katie and Brad tossing a few segments to reporters in Beijing!

Oh, and one last thought! The best line of the week was definitely courtesy of Rick! When Emily begged him to take her hostage instead of Alison, Rick said, ""Thanks for the offer but I need to take someone people really care about." Couldn't have said it better myself!

Is ATWT's Lily Really Over Holden?